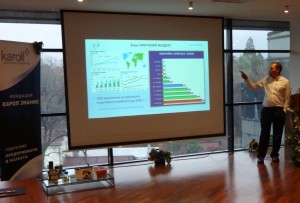 The project “Oxymet – an environmentally friendly magnesium-air battery for industrial applications” is working on the development of a battery that can be used in electric sea / river transport, water / subwater drones and diving equipment. Magnesium, air and salt water are required to produce electricity with Oxymet. Magnesium is 1 000 times more common in the Earth’s crust and oceans than lithium, making it a much cheaper raw material. It is environmentally friendly. At the same time, the magnesium-air battery is also especially safe to use.

Dr. Popov, together with Assoc. Prof. Reneta Bukureshtlieva, Dr. Yovka Milusheva, Eng. Krum Banov from IEES-BAS and with the help of Ms. Desislava Boneva, Dr. Irina Gocheva and Eng. Patrick Gugenberger have refined the technology for the development of metal-air batteries, on which scientists from the Institute worked as early as the 70s of the 20th century. With the award received, the team plans to continue work on the commercialization of the battery for use in the next generation of electric water transport.

The competition is a final part of the Foundation’s annual program of the same name which aims to support young Bulgarian scientists in their work on significant scientific topics and projects of practical applicability, helping them develop their entrepreneurial skills to commercialize the results of their scientific knowledge and inventions.

NEWS FROM BCCI
Topical issues on the European Agenda discussed at a meeting with Bulgarian Deputy Prime Minister Mariyana Nikolova
Visit of the CEO of EUROCHAMBRES in Sofia at the invitation of BCCI Още
20th anniversary of the EU Club at BCCI
A successful tradition of Enterprise Europe Network – part of the global business support network Още
Georgi Stoev is awarded the Japanese Government’s Order of the Rising Sun, Gold Rays with Neck Ribbon
For promoting the commercial and economic relations between Japan and Bulgaria Още
BCCI hosted a meeting of innovation structures from the Western Balkans regions
For partnership and progress in the field of innovation and technological development Още
Enhancing the Trade and Economic Relations between Bulgaria and Israel
Session of the Bulgaria – Israel Chamber of Commerce and Industry Още
Cooperation with the Hellenic Business Council
In implementing joint projects and encouraging Greek investments Още
BUSINESS CLIMATE
A slight Improvement in the Business Climate in January 2020
A result of the more optimistic industrial entrepreneurs’ assessments and expectations Още
TOURISM IN BULGARIA
6.4% more foreigners’ visits to Bulgaria in December 2019
The share of visits of ЕU citizens was 55.4% of the total number of foreigners’ visits to Bulgaria Още
FINANCE
Finance Minister Goranov: BGN-EUR exchange rate won't change
Още
SCIENCE NEWS
A young scientist at IEES-BAS is the winner of the “Entrepreneur in Science 2020” competition with a project for an ecological battery
Още