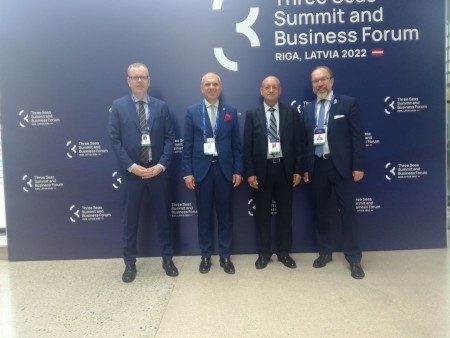 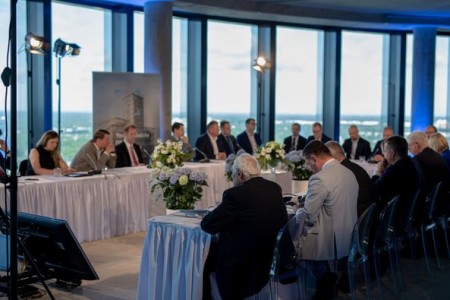 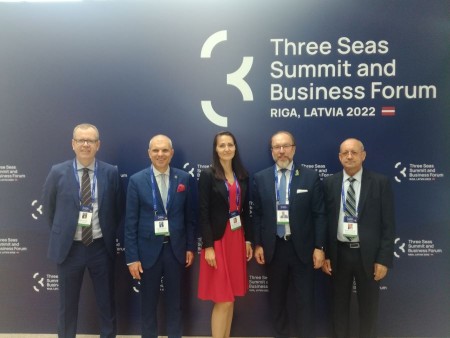 The Bulgarian Chamber of Commerce and Industry took part in the business delegation that visited Riga on the occasion of the Three Seas Initiative Forum. The event was opened by the Prime Minister of Latvia Krišjānis Kariņš, who said that this year’s hosting of the organization is politically inspired and driven by business interests. More than 600 participants took part in the forum on-site and virtually.

The main goal of the initiative at the moment is to promote the rule of law in the situation of war in Eastern Europe. The participating Heads of State and Representatives of the Governments of Bulgaria, Latvia, Croatia, Lithuania, Slovakia, Poland, Germany, the Czech Republic, Estonia, Hungary and the European Commission expressed their support for Ukraine and its European future, stating that the main goal is to restore peace and security in the region.

Statements from the Presidents of the Initiative countries made it clear that the Three Seas Initiative not only strengthens the north-south ties, but also promotes transatlantic contacts in the energy, digitalization, transport and logistics sectors.

The forum was also an occasion to hold a meeting of the chambers of commerce and industry of the Three Seas Initiative countries. Aigars Rostovskis, President of the Latvian Chamber of Commerce and Industry, said that the cooperation and tradition of hosting such a meeting follows the discussion organized by the BCCI in 2021 in Sofia. The presidents of the chambers of commerce and industry discussed important topics for business, including high energy prices, opportunities to switch to alternative energy sources, and transportation.

The President of BCCI Tsvetan Simeonov held talks with his counterparts from Latvia, Lithuania, Ukraine and the Association of the European Chambers of Commerce and Industry EUROCHAMBRES. Future joint initiatives, events and projects were among the topics discussed. Simeonov discussed with the CEO of EUROCHAMBRES Ben Butters ideas for European projects. He discussed with Gennadiy Chyzhykov, President of the Ukrainian Chamber of Commerce and Industry, the steps for organizing an upcoming webinar for Bulgarian and Ukrainian companies in the field of transport and logistics, as well as Chyzhykov's recent visit to Bulgaria.

Kristalina Georgieva, Managing Director of the International Monetary Fund (IMF), Mathias Cormann, Secretary-General of the Organisation for Economic Co-operation and Development (OECD), and Valdis Dombrovskis, Vice-President of the European Commission addressed the participants in the event.

Several thematic panels addressed the topics of investment in the region and opportunities to improve connectivity.

Special attention was paid to the Three Seas Initiative Investment Fund (3SIIF), which aims to supplement the lack of infrastructure in the region and is an important means of achieving security. The participation of the USA in the fund with USD 300 million was announced.

The 3SIIF acquired a significant share in BMF Port Burgas – the main port operator of the port of Burgas, from Advance Properties Ltd.

The investment meets the objective of the fund to improve the connectivity within the Three Seas region. Port Burgas is an important infrastructure asset connecting the region with Central Asia and the Middle East, it is strategically located on the Black Sea coast and is the closest port of the European Union to the Bosporus. The investment will strengthen EU’s integration by increasing its infrastructure opportunities.

In addition to its capital participation in BMF Port Burgas, the Fund will support the long-term growth of the port with significant subsequent investments to expand its capacity and capabilities. These investments shall include an expansion of the existing and the construction of new berths, further modernization of facilities and the ability to handle new types of cargo. New industrial production facilities will be created in Bulgaria and the region, with producers and exporters benefiting from the wide range of activities and excellent services of the port.

The investment in BMF Port Burgas represents the first direct investment of 3SIIF in Bulgaria, with 3SIIF already having a presence in the country through the acquisition of a majority stake in Enery, a developer of renewable energy sources in the region with a project pipeline of more than 3GW for the production of energy from renewable sources.