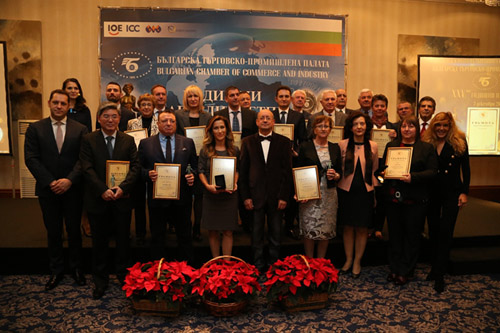 For the 25th time, the Bulgarian Chamber of Commerce and Industry (BCCI) conferred its annual awards for economic achievements at an official ceremony which was held in Sofia Hotel Balkan on 4th December. Among the official guests of the event were the Deputy Prime Minister and Minister of Foreign Affairs Ekaterina Zaharieva, the Minister of Labour and Social Policy Biser Petkov, the Deputy Minister of Economy Aleksandar Manolev, representatives of the public institutions, the diplomatic missions accredited in Bulgaria, members of BCCI, branch organisations, regional chambers of commerce and industry, and partners of the Chamber from the country and abroad.

In his opening speech, the President of BCCI Tsvetan Simeonov said that this year the Chamber has again worked to improve the economic environment and support the daily activities of the companies, adding that it will continue to encourage the companies to adopt international standards in commerce and industry. The complicated EU rules and the sometimes excessive efforts of the Bulgarian institutions in their implementation continue to hamper companies, President Simeonov said and gave an example with the EU General Data Protection Regulation. He said that in order to respond to this challenge, the BCCI had prepared in time packages of services to make the fulfillment of these obligations by companies easier and more readily understandable and accessible. “The big task that remains for us is to simplify requirements and procedures both in Bulgaria and in the EU”, he added.

The Minister of Foreign Affairs Ekaterina Zaharieva said that BCCI works not only for its members but for every Bulgarian citizen. “It was a really good year for the Bulgarian business”, Minister Zaharieva said. “The main priority of the Government is education, but I, as a Foreign Minister, try to improve our relations with other countries with regard to labour migration and attracting to Bulgaria the traditional Bulgarian minorities abroad”, the Minister of Foreign Affairs said.

“The results show that Bulgarian companies are competitive and innovative, that is why we expect even better results”, said the Deputy Minister of Economy Aleksandar Manolev.

With the bronze statuette “Hermes” made by the artist Stavri Kalinov, were awarded leading Bulgarian companies that are an example of good management. The Ambassador of China to Bulgaria H.E. Mr. Zhang Haizhou received an award for his contribution to the development of diplomatic relations between the Republic of Bulgaria and the People’s Republic of China, and Mrs. Ulrike Straka, Commercial Counsellor at the Embassy of the Republic of Austria to Bulgaria received a prize for her outstanding contribution to the promotion of the economic cooperation between Bulgaria and Austria. Information about the winners in the various categories HERE.

NEWS FROM BCCI
BCCI conferred its traditional Annual Awards
For the 25th time to leading companies in the Bulgarian economy Още
Economic partnership with Canada was discussed at a forum in Plovdiv
In the context of the EU - Canada Comprehensive Economic and Trade Agreement Още
Meeting with the Leader of the European Investment Bank in Bulgaria
Presentation of important projects that the bank institution finances in Bulgaria Още
Plenary Assembly & Business Roundtable of ABC
17th December 2018 in Istanbul, hosted by the Union of Chambers of Commerce and Commodity Exchanges of Turkey Още
BCCI issues Excellent SME certificate
To promote successful SMEs, secure and safe business, good business practices and to increase market transparency Още
BUSINESS CLIMATE
NSI: Business Climate in Bulgaria improves in November
The business climate indicator increased by 0.6 percentage points compared to October Още
BULGARIAN ECONOMY
S&P Global Ratings agency affirms Bulgaria's credit rating, outlook remains positive
Robust growth in 2018-2021 on the back of strong private consumption and accelerating investments Още
TOURISM AND TOURISM INDUSTRY
Bulgaria develops as year-round tourist destination
Over 8.4 million foreign tourists visited this country between January and October 2018 Още
INVESTMENT NEWS
The Bulgarian Ministry of Economy is expecting 49 investments for BGN 1.379 billion
Още
The first electric car battery plant may appear in Bulgaria next year
The automobile sector in the country is developing seriously, probably representing about 10% of GDP Още
BULGARIA IN EU
Bulgaria does not support Mobility Package I common approach
The negotiation process continues... Още