Cooperation between Bulgaria and Japan is developing dynamically 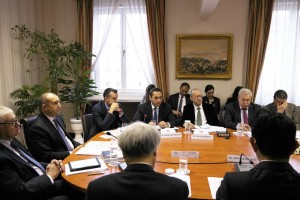 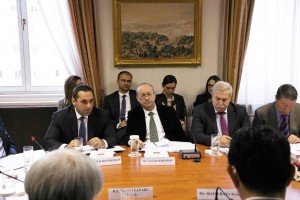 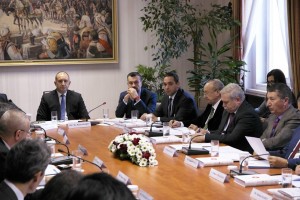 Tsvetan Simeonov, President of the Bulgarian Chamber of Commerce and Industry, and the members of the Board of Directors of BCCI Konstantin Glavanakov and Stanislav Novakov, took part in a meeting aiming to promote investment cooperation with Japan. The event hosted by the Bulgarian Head of State Rumen Radev was attended by representatives of some of Japan’s largest corporations in the field of information technology, electronics, automotive and food industry. This was the first visit to Bulgaria for some of them.

On the Bulgarian side, the meeting was attended by the nationally representative employers’ organizations, representatives of the institutions, including the Minister of Economy Emil Karanikolov and Petar Kanev, Chairman of the Economic Policy and Tourism Committee of the National Assembly, as well as of the Bulgarian academic circles.

"Japan is Bulgaria’s key partner in Eastern Asia, not only by way of economic and trade cooperation, but most of all for the opportunities it represents: we have already attracted Japanese investment, and we are glad that they are in the high technology and other sectors with high added value,” the President of the Republic of Bulgaria Rumen Radev said. He pointed out that the cooperation with Japan develops the potential and creativity of young Bulgarians, who are the country’s biggest asset.

“Today’s meeting shows that our bilateral business relations have more potential than the statistics can show,” the Japanese Ambassador to Bulgaria H.E. Masato Watanabe said. According to him, partnership with Bulgaria provides conditions for the development of trade with the EU and the Western Balkans, which is an advantage for Japanese companies.

Tsvetan Simeonov thanked President Rumen Radev and Ambassador Masato Watanabe for the actions and efforts to intensify the bilateral cooperation between Bulgaria and Japan. “Japanese investments are of interest to us because of their high-tech achievements, and because such investments do not require large territory, huge premises and a lot of employees”, Simeonov said. “In Bulgaria we have brilliant ICT experts, and by investing in these high technology sectors we can join forces to attract excellent Bulgarian experts working abroad.”

During the meeting, the President of BCCI presented the services provided by the Chamber in support of businesses, as well as the digitized Arbitration Court at BCCI, which has a cooperation agreement with the Japan Commercial Arbitration Association since 2011. “Just for comparison - the Japan Association has about 20 cases annually on average, while at BCCI, the number of international cases alone is 20, and the national cases are 7 times more,” Simeonov said.

The growing potential for Bulgaria, after Brexit, to attract more Japanese companies from the high-tech sector was noted. The establishment of a Japanese – Bulgarian Business Association was also announced. The aim is to further support the processes of creating mutually beneficial business partnerships.

The President of BCCI mentioned that since 1972 a Bulgarian – Japanese Business Council has also been operating at BCCI, but over the years large Japanese investors have not participated in it. “I am pleased with the initiative to establish a Japanese – Bulgarian Business Association which will give a new dynamic to the bilateral relations, and I declare BCCI’s support for the initiative,” concluded Simeonov. Konstantin Glavanakov and Stanislav Novakov also spoke in support of the initiative.

NEWS FROM BCCI
Cooperation between Bulgaria and Japan is developing dynamically
The focus is on science, innovation and potential of young people Още
Second meeting of Bulgarian companies with representatives of foreign diplomatic missions
Initiative of the Council of Sectoral Organizations at BCCI Още
Focus on Bulgaria – Serbia relations
The business conditions in Free Zone Pirot to be presented at BCCI Още
Meeting with the newly established Bulgarian – Hellenic Chamber of Commerce and Industry
The organization presented its plans and programme for 2020 Още
FINANCE
Bulgaria’s Parliament synchronizes Currency Act with requirements for accession to Eurozone
Amendments to the Currency Act Още
BULGARIAN ECONOMY
Domestic prices in December 2019 remain unchanged compared to the previous month
Higher prices were registered in the mining and quarrying industry Още
5 companies confirmed their offers for Belene NPP
The next deadline for submission of binding offers is 31 May 2020 Още
INTERNATIONAL COOPERATION
Bulgaria Certified to Export Heat-Treated Poultry Products to Argentina
Bulgaria would receive certificate for fresh poultry meat as soon as possible Още
VIEWS ON BULGARIA
The Rhodope narrow gauge in Bulgaria ranked among the Guardian Top 10 best scenic rail journeys in Europe
Several other countries are also included in the ranking Още