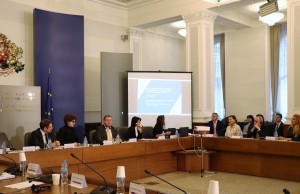 Bulgaria improves the governance of state-owned enterprises, as well as the practices of state ownership. This is what the review and the assessment of the state-owned enterprise corporate governance framework under the Organisation for Economic Cooperation and Development (OECD) Guidelines show. The results of the study were supported by the EU’s Structural Reform Support Programme and presented at the Council of Ministers by Mr. Hans Christiansen and Arijete Idrizi from the Secretariat to the OECD Working Party on State Ownership and Privatisation Practices. The Deputy Minister of Finance Mrs. Marinela Petrova, the Deputy Minister of Economy Mr. Latchezar Borisov, representatives of all ministries and of the National Association of Municipalities in the Republic of Bulgaria also took part in the event.

Hans Christiansen said: “Recent legal reform in Bulgaria took a big step toward implementing OECD recommendations on ownership and governance of state-owned enterprises. The main priority now is ensuring, first, that adequate supporting regulations are put in place and, second, that the new body of rules is fully implemented across Bulgaria’s state-owned sector”.

Cvetan Kyulanov, the Head of European Commission’s Representation in Bulgaria said: “State-owned enterprises are important actors in sectors such as energy, minerals, infrastructure and utilities. We are pleased that the support provided under the EU's Structural Reform Support Programme offered guidance to strengthen Bulgaria’s legislative environment for state enterprise ownership. The adoption of modern public policies related to the governance of state-owned enterprises in line with best international practices will further support the country’s integration in the EU economy.”

The OECD made some proposals for measures to be applied by our country in the short and long term to support the implementation of legislation in this area. Among them are enhancing the effectiveness of the Agency for Public Enterprises and Control, an adequate regime of monitoring and assessment of the performance of state-owned enterprises, establishing proper rules and procedures for selection and appointment of the management bodies of public enterprises, applying the international financial accounting standards by all large public enterprises and meeting the same disclosure standards applied by listed companies, maintaining a level playing field with private companies.

Deputy Minister Petrova was grateful for the recommendations made and stressed that with the adoption of the Law on Public Enterprises state-owned enterprises would be governed by the global rules applied by OECD members. “Your advice will support the efforts for a state-owned enterprise corporate governance reform and for attaining our goal to join ERM II and the Banking Union. With the new legislation Bulgaria also meets the recommendations of the Council of the EU to Bulgaria made in 2019 in relation to the economic and fiscal policies and employment policies which include a modernisation of the corporate governance of state-owned enterprises”, the Deputy Minister of Finance added. She announced that the draft Rules Implementing the Law on Public Enterprises were to be published for public discussions by end-January 2020.

Deputy Minister Latchezar Borisov pointed out that the work done by the Bulgarian government was received very positively by the OECD. According to him, the fact that public enterprises operated with the public funds provided to them required a higher degree of transparency and publicity of their activity compared to private sector enterprises.

The Executive Director of the Agency for Public Enterprises and Control Ms. Petya Alexandrova presented the Agency’s new functions as the coordinating unit in the area of public enterprises and its future interaction with the ministries in this field.

The review describes and assesses the Bulgarian state-owned enterprise corporate governance framework against the OECD Guidelines on Corporate Governance of State-Owned Enterprises. It was requested by Bulgaria in order to be acknowledged as an Adherent to the Guidelines.

Taking account of our country’s considerable progress in the area of corporate governance of state-owned enterprises in the last year, in October 2019 the Working Party on State Ownership and Privatisation Practices to the OECD Corporate Governance Committee approved the adherence of Bulgaria to the Guidelines on Corporate Governance of State-Owned Enterprises. An official letter of the OECD Secretary General Angel Gurria dated 6 December 2019 informed the Minister of Finance Vladislav Goranov that our country became an adherent to the Guidelines as of that date. The Adherent statute is also an enormous progress to the country’s full-fledged membership in the Organisation for Economic Cooperation and Development.

The review and the assessment are supported financially by the Structural Reform Support Programme of the European Union.

NEWS FROM BCCI
The Bulgarian-Cypriot business association was established
Spheres of future mutual interest were discussed, including real estate, tourism, food industry Още
The Charge d'Affairs of the Embassy of the Kingdom of Cambodia in Sofia visited BCCI
Discussion on joint initiatives to promote business cooperation Още
WTCA's General Assembly and B2B session
1-4 March 2020, in Taipei at the Taipei International Convention Center (TICC) Още
PROGRAMMES & PROJECTS
Bulgaria withdraws application form for Struma Motorway through Kresna Gorge
The decision does not stop it, but accelerates the team work Още
ANALYSIS AND PROGNOSIS
OECD presents results of state-owned enterprise governance review in Bulgaria
Още
BULGARIAN ECONOMY
The Monthly Inflation in December 2019 was 0.7%
The annual inflation in December 2019 compared to December 2018 was 3.8% Още
The exports of goods from Bulgaria to third countries increased by 4.5%
Turkey, China, Serbia, the Russian Federation, the United States and the Republic of North Macedonia accounted for 50.5% of the exports to non EU countries Още
Building construction registered a 6% growth compared to last year
The civil engineering was registered a decline by 4.5% Още
INTERNATIONAL COOPERATION
Bulgaria participates in Green Week 2020
19 Bulgarian manufacturers present wine, organic essential oil products Още
Bulgaria and Qatar will cooperate in the fields of education, research and technology
Още