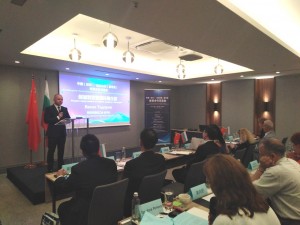 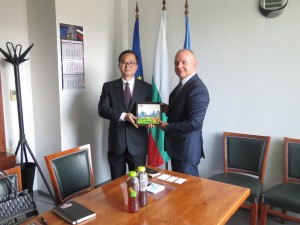 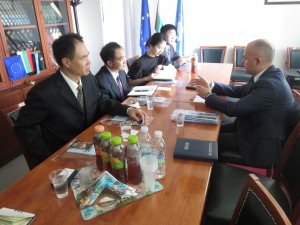 The Secretary General of the Bulgarian Chamber of Commerce and Industry Vasil Todorov took part in a Conference on Economic and Commercial Cooperation China /Shenzhen/ - Bulgaria, which was held in Sofia. More than 30 representatives of the Bulgarian business had the chance to establish contacts with Chinese companies working in the field of fintech, cross border e-commerce, logistics, etc., and to learn more about partnership opportunities with businesses from the high-tech center of China – Shenzhen.

Mr. Chunji Liu - Deputy Director (Operations) of E-commerce Division of Shenzhen Municipal Commerce Bureau introduced the participants in the conference to the business climate and investment opportunities in Shenzhen. The city is the first special economic zone in China with well-developed marine and air transport.

Vasil Todorov addressed the participants in the conference and declared BCCI’s readiness to assist Bulgarian and Chinese businesses through the variety of services which the Chamber provides. The Secretary General of BCCI said that China is traditionally Bulgaria’s largest commercial partner in Asia. He pointed out that the country ranks 2nd by exports and 3rd by imports to third countries from/to Bulgaria in 2018 (after Russia and Turkey).

At BCCI, the Secretary General had an individual meeting with the Shenzhen delegation, during which he presented in details the activities of the Chamber and its regional structure. During the meeting the possibility of future cooperation between Bulgaria and Shenzhen in the field of agriculture, tourism and information technologies was discussed.

NEWS FROM BCCI
A delegation from China Construction Bank visited BCCI
The possibilities for developing bilateral cooperation were discussed Още
Meeting of the EU Club at BCCI on the occasion of the assumption of the Presidency of the Council of the EU by the Republic of Finland
The new presidency is committed to taking serious measures to respond to climate change Още
Opportunities for investment and partnership with high-tech center in China – Shenzhen
The city is the first special economic zone in China with well-developed marine and air transport Още
Meeting with the newly-appointed Head of the Bulgarian Commercial and Economic Section in Berlin
Discussion of opportunities for partnership with the German – Bulgarian Chamber of Commerce and Industry Още
BCCI provides legal consultations
Още
FINANCE
China's Second-Largest Bank, China Construction Bank, Is Considering Entering Bulgaria
This was stated by the President of the Bulgarian Chamber of Commerce and Industry Tsvetan Simeonov to Bloomberg TV Bulgaria Още
BULGARIAN ECONOMY
Bulgaria's GDP Grew by 3.3%
The projections for Bulgaria's economic growth in 2019 and 2020 remain unchanged - 3 Още
BUSINESS
Bulgaria Industrial Production Growth At 5-Month Low
Bulgaria’s industrial production grew at the slowest pace in five months in May, data from the National Statistical Institute showed on Tuesday Още
TOURISM IN BULGARIA
Chinese Visitors to Bulgaria Surge
More and more Chinese tourists are showing an interest in visiting Bulgaria, data from the country's largest online travel agency showed, reports China Daily Още