The Ambassador of Argentina visited BCCI 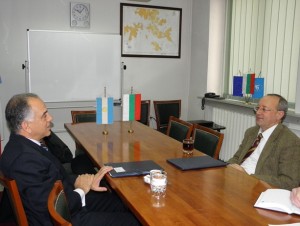 H.E. Guillermo Salvador Azrak attended BCCI. The visit was initiated by Ambassador Azrak who expressed content with the continuing growth of bilateral trade and the existing development potential.

During the meeting the increasing interest of Argentinean companies to participate in fairs and exhibitions in our country was noted. The parties agreed to cooperate for the organization of a presentation of Argentinean investment and trade opportunities in the second half of the year, in the context of the economic prosperity of the Latin American country, which has seen the most sustained progress in its 200-year-history.

The website of the Embassy of Argentina in Bulgaria is: http://ebulg.mrecic.gov.ar

NEWS FROM BCCI
BCCI supports the position of EUROCHAMBRES for economic growth through jobs creation
Eurochambres expressed its content with the EU Summit conclusions, adopted on 30 January in Brussels Още
Where is Bulgaria after 5 years of EU membership?
The results could have been better had the suggestions of the business been taken into account Още
BCCI: Quick and timely debt collection is often a matter of survival to creditors
Private enforcement agents have collected over BGN 2.4 billion since the establishment of their Chamber in 2006 Още
Trade relations between Bulgaria and the Republic of South Africa are developing rapidly
The Ambassador of the Republic of South Africa H.E. Sheila Camerer and the newly appointed Consul and Political and Economic Advisor Boiki Motloung visited BCCI Още
The Ambassador of Argentina visited BCCI
H.E. Guillermo Salvador Azrak expressed content with the continuing growth of bilateral trade Още
BULGARIAN ECONOMY
The data on the implementation of the consolidated budget as of 31 December 2011
The deficit reported is significantly lower than the provided for in the 2011 Annual Budget Act Още
LEGISLATION AND REGULATION
The Commission on Protection of Competition adopted guidelines about information exchange between competitors
The so called „black list“ gives particular examples for the prohibited exchange of information Още
BULGARIA AND EU
The Minister of Finance Simeon Djankov: “All EU members must introduce clear budget austerity rules in their national laws”
Every EU Member State should introduce clear fiscal discipline rules in their national laws Още