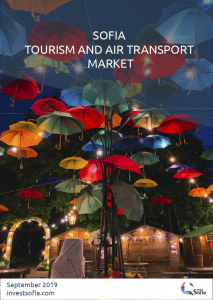 The third edition of the annual report “Sofia Tourism and Air Transport Market Report” has been published.

The document presents an overview of the latest data, analyses and reviews of the key tourism indicators, as well as current statistics on Sofia Airport aircraft movements, the number of tourists by country of origin and by the purpose of their visit, the accommodation capacity of the city, the development of the urban environment in Sofia, the potential of the MICE industry, and the most important trends in the sector today.

Sofia Tourism and Air Transport Market Report 2019 is prepared by the Investment and Business Development Department of the Sofia Investment Agency.

Here are some of the key points from the report:

More detailed data, charts, analyzes and trends can be found in the full version of the report.

NEWS FROM BCCI
Bulgarian entrepreneurs expect 2020 to be better against the background of cautious global economy forecasts
BCCI presented the “European Economic Survey 2020” Още
Business Conference “Bulgaria – Pakistan: Opportunities for Cooperation in Trade and Tourism”
Meetings between interested companies from both countries Още
The Bulgarian – Japanese relations in the focus of a meeting with H.E. Masato Watanabe
Companies do not take full advantage of the EU – Japan Free Trade Agreement Още
BCCI provides legal consultations
In the field of company, commercial, administrative and labour law, out-of-court dispute resolution Още
ANALYSIS AND PROGNOSIS
What is the Industry Profile of Bulgarian Districts
Author: Institute for Market Economics Още
BULGARIAN ECONOMY
The European Commission Raised Bulgarian GDP Growth Forecast for 2019 to 3.6%
For 2020, a level of 3.0% is expected Още
Invest Sofia’s third “Sofia Tourism and Air Transport Market Report” 2019
The aim is to provide potential investors and all stakeholders with comprehensive and accessible information Още
The government expects a BGN 1,600 average salary in three years
This is recorded in the updated mid-term budget forecast Още
INTERNATIONAL COOPERATION
Bulgaria and Vietnam to deepen their cooperation in the field of education
An agreement indicates quotas for exchange students, doctoral and postgraduate students Още