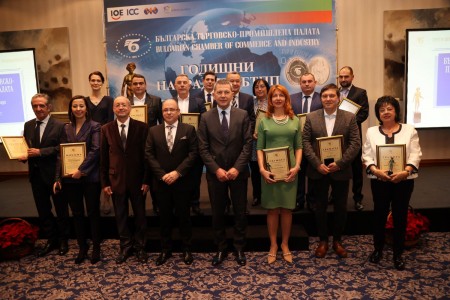 As the oldest and most renowned business organization in Bulgaria, the Bulgarian Chamber of Commerce and Industry diligently preserves its traditions and for the 29th time bestowed its annual awards for the achievements of companies and partners who have worked for the development of the business environment in Bulgaria.

After two years, during which the awards were presented in a hybrid format due to the pandemic, now the award ceremony has returned to its traditional splendor - the Hermes Bronze Statuette, Plaque and Diploma awards were presented at the "Sofia Hotel Balkan" on 1st December 2022. More than 200 representatives of the state institutions, diplomatic missions accredited to our country, companies-members of the BCCI, branch organizations, regional chambers of commerce and industry, and partners of the Chamber from the country and abroad attended the ceremony.

BCCI awarded the winning companies in the Chamber's ranking "TOP 100 Companies leading in the Bulgarian economy®", classified on the basis of internationally recognized objective criteria. Traditionally, a regional chamber of commerce and industry, a branch organization, foreign ambassador and commercial counselor accredited for Bulgaria were also included in the classification. A media and a journalist found their place in the ranking as well.

Ukrainian Ambassador H.E. Vitalii Moskalenko received from BCCI President Tsvetan Simeonov a Hermes Bronze Statuette and an Honorary Diploma for his contribution to the development of diplomatic relations with Bulgaria and to the achievement of BCCI's objectives.

The Turkish Embassy's Commercial Counsellor Mrs. Sinem Taştan received from BCCI Vice-President Todor Tabakov a Hermes Bronze Statuette and an Honorary Diploma for her contribution to the promotion of the economic cooperation and bilateral trade and to the achievement of the BCCI's goals.

A Plaque and an Honorary Diploma were presented to PPS INVEST LTD., TEXAID BULGARIA LTD., STROIKOLUX LTD. and STARDOOR LTD.

A Plaque and an Honorary Diploma went to Nova TV in the Media Category and to Diana Yankulova from Bulgarian National Radio in the Journalist Category.

Information about the winners of BCCI's Annual Awards 2022 HERE