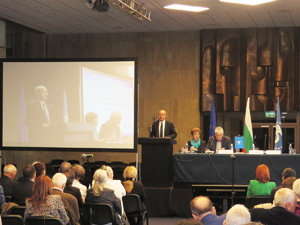 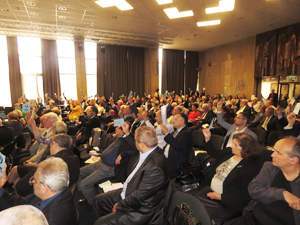 A new 87-member Board of Directors of the Bulgarian Chamber of Commerce and Industry (BCCI) was elected during the 34th regular General Assembly of the Chamber, held on 4 June.

As members of the new Executive Council of BCCI, in addition to the President and the Vice-Presidents, were elected Valentina Zartova, Vasil Todorov, Gena Sabeva, Emil Peev, Ivan Stoimenov and Lachezar Iskrov.

The Guidelines for the activity of the Chamber in the period 2019 – 2023 adopted by the General Assembly include: creating a more favourable environment for Bulgarian entrepreneurship, its sustainable and independent development; increasing the competitiveness and export potential of companies; developing the existing forms of flexible employment; encouraging the emergence of high-tech and highly productive jobs; preparing managers for corporate governance with artificial intelligence; regulating migration and improving the conditions for import of workforce which is deficient in the country; stable development of the Bulgarian economy; stimulating investment activity, including foreign investments.

The budget of the organization with revenues by directorates and expenditures by economic elements for the period 2019 – 2023 was approved.

NEWS FROM BCCI
On 4 June a regular General Assembly of the Bulgarian Chamber of Commerce and Industry was held
Tsvetan Simeonov was re-elected as President of the Board of Directors Още
Bulgarian delegation took part in the Three Seas Initiative Business Forum in Ljubljana
A number of international and national projects for greater regional transport, digital and energy connectivity were discussed Още
Meeting with the newly-appointed Ambassador of Bulgaria to Ireland
Irish investments in Bulgaria are mainly in the field of real estate, hotels and restaurants, financial intermediation Още
INVESTMENT NEWS
New investor puts EUR 14 million in warehouse and production facilities in Bulgaria's Trakia Economic Zone
The investment will take place in two stages Още
With nearly BGN 4 million investment, Volvo Group Bulgaria opened its own service center near Plovdiv
A part of the overall strategy of the company for sustainable development of the service network in the country Още
BULGARIAN ECONOMY
The GDP growth rate in the first quarter of 2019 is 3.5%
Bulgaria is among the EU champions for GDP growth Още
ENERGY AND ENERGY EFFICIENCY
First American liquefied gas for Bulgaria
First step towards diversifying supplies Още
PROGRAMMES & PROJECTS
Operational Programme "Environment" provides additional funds for the sectors "Air" and "Waste"
The Monitoring Committee approved the assessment criteria for a new procedure Още
FINANCE
Standard & Poor's affirms credit ratings on Bulgaria
The outlook remains positive Още