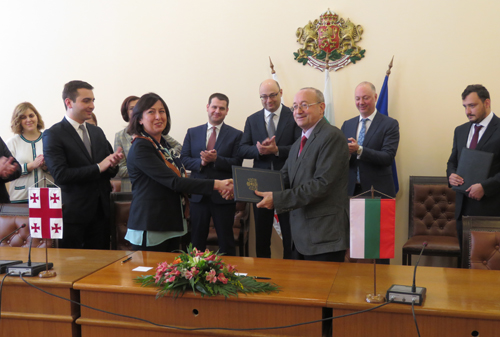 The President of BCCI Mr. Tsvetan Simeonov participated in the Sixth Meeting of the Bulgarian-Georgian Intergovernmental Commission for Trade, Economic, Scientific and Technical Cooperation. The meeting was held in Sofia on April 4-5 and was chaired by the Minister of Transport, Information Technology and Communications - Mr. Rosen Zhelyazkov and the Minister of  Economy and Sustainable Development of Georgia – Mr. George Kobulia.

A Memorandum of Understanding between BCCI and CCI Georgia was signed during the meeting. The Presidents of the two Chambers, Tsvetan Simeonov and Nino Chikovani, said that the Memorandum would extend the cooperation between the organizations on both bilateral and multilateral basis. Tsvetan Simeonov emphasized the experience of BCCI in the field of issuing electronic commercial documents, the Court of Arbitration, etc. During the meeting the BCCI Chairmanship of the Business Council of the Organization for Black Sea Economic Cooperation and the participation of several Georgian wineries during the Balkan International Wine Festival, which will take place in Sofia from 5 to 9 June and will include a special section for the Black Sea countries  were also discussed.

NEWS FROM BCCI
MD Elektronik started the construction of its first plant in Bulgaria
For the production of data cables and electronic components Още
Memorandum of Understanding between BCCI and Chamber of Commerce and Industry - Georgia
Expanding cooperation on both bilateral and multilateral basis Още
The Ambassador of Vietnam visited BCCI
Activating economic ties and labour import - in the focus of discussion Още
Financial Times opened an office in Sofia
Cait O'Riordan: Sofia is an irresistible destination for such an investment Още
UPCOMING EVENTS
15th South-East European Exhibitions & Conferences on Smart Cities
16 – 18 April 2019 in Sofia, Bulgaria Още
INVESTMENT NEWS
Equinix opens second data center in Sofia
The investment amounts to USD 19 million Още
The European Investment Bank has financed Bulgaria with EUR 1.5 billion
The largest investment for the year 2018 is a loan for a new port facility in Varna Още
ENERGY AND ENERGY EFFICIENCY
Greece and Bulgaria agree to work on updated schedule of the Interconnector Greece-Bulgaria
The interconnector could be put into operation in 2020 Още
FINANCE
IMF lifts Bulgaria's 2019 GDP growth forecast to 3.3%
In the latest edition of its World Economic Outlook report. Още