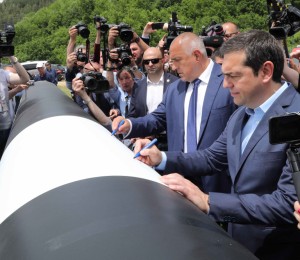 The gas interconnector between Bulgaria and Greece will play a key role for the whole region and Europe, Prime Minister Boyko Borissov said at a ceremony in the village of Kirkovo, where together with his Greek counterpart Alexis Tsipras he gave the symbolic start of the construction works of the gas interconnector link between the two countries.

The Greek Prime Minister Alexis Tsipras stressed the importance of the projects and emphasized the opportunities for connectivity between the Balkans and the Eastern Mediterranean.

The two Heads of Government also noted the key importance of the gas interconnector as part of the common Balkan projects and pointed out the role of the construction and the roads, railways, ports and digital infrastructure for connectivity and stability in the Balkans.

The construction of Greece - Bulgaria interconnection gas pipeline aims to ensure diversification not only of the routes but also of the natural gas sources for Bulgaria and the region. As part of the development of the Southern Gas Corridor, through IGB Bulgaria its neighbouring countries will also have access to alternative supplies from the Caspian region as well as from existing or future liquefied gas terminals.

The gas pipeline between Bulgaria and Greece is 182 km long, 150 km in Bulgaria, connecting the Greek gas network in Komotini with the Bulgarian gas network in Stara Zagora. Its technical capacity is 3 to 5 billion cubic metres. The total cost of the project is EUR 220 million.

NEWS FROM BCCI
More than 300 Chinese companies visited Bulgaria in 2018
Real projects of Bulgarian companies looking for a partnership on the Silk Road are being explored Още
Seminar at BCCI promoting trade and economic cooperation between Bulgaria and South Africa
Investments from the Republic of South Africa in Bulgaria are mainly in real estate and shopping centers Още
Meeting with the newly-appointed Ambassador of Bulgaria to Israel
Discussion of the Bulgarian – Israeli economic relations in order to increase the volume of bilateral trade Още
Schreiber Foods Bulgaria is looking for trading partners with the assistance of BCCI
The company started to produce a new type of product - oral rehydration solution in tetra pack Още
Opportunities to expand the cooperation with Slovak companies
Main sectors for partnership – automotive industry, food industry, tourism... Още
UPCOMING EVENTS
Meeting of the Board of Directors of BSEC Business Council, 7 June 2019
Under the Bulgarian Chairmanship–in–office Още
BULGARIAN ECONOMY
The total income per household increased by 8% in Q1 of 2019
In the structure of the total expenditure, food expenditure was 30.2 per cent Още
Eurostat: Bulgaria has exported around 10 000 tonnes of honey in the EU
The market share of Bulgarian exports to the EU is about 1%, but the country compensates with the quality production Още
INVESTMENT NEWS
WITTE Automotive doubles production area in Bulgaria
Currently 1000 employees work at the factory; thanks to the expansion, 350 additional jobs will be created over time Още
ENERGY AND ENERGY EFFICIENCY
Official start of the construction of the gas interconnector between Bulgaria and Greece
The project would lead to a real diversification of the sources and routes for natural gas supply Още
Bulgaria is officially seeking for an investor for Belene Nuclear Power Plant
Published in C176 issue of the Official Journal of the European Union Още