Activation of the business contacts between Bulgaria and Ireland 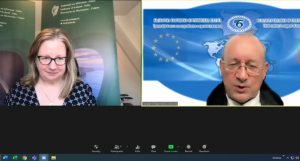 The President of BCCI Tsvetan Simeonov met with H.E. Martina Feeney, Ambassador Extraordinary and Plenipotentiary of Ireland, who recently arrived in Sofia. He provided the diplomat with up-to-date information on the partner relations between the chambers of commerce and industry of both countries, which, in addition to their bilateral cooperation, communicate very actively within the Association of the European Chambers of Commerce and Industry (EUROCHAMBRES).

Tsvetan Simeonov also presented the guidelines for the work of the BCCI as a nationally recognized business and employers’ organization. Ambassador Feeney stressed that her country is closely involved with the International Labour Organization (ILO) and the celebration of the organization’s 100th anniversary. One of the authors of the Declaration of Philadelphia /1944/, which states the main goals and objectives of the ILO, is Irish.

The President of BCCI and the diplomat discussed the negative impact of the COVID-19 crisis on the life and economy of both countries, as well as on business, internationalization and digitalization.

Simeonov informed Ambassador Feeney about the leading initiatives of the BCCI, including the EU Club, the Investment Council, as well as the main services and activities of the Chamber.

An active exchange of information was agreed in order to facilitate and support business cooperation between Bulgarian and Irish companies.

NEWS FROM BCCI
Activation of the business contacts between Bulgaria and Ireland
An active exchange of information was agreed in order to facilitate and support business cooperation between Bulgarian and Irish companies Още
Verify the existence and reliability of your potential business partners
BCCI provides written reports about the status of registered companies Още
A joint business council Bulgaria – Pakistan is to be established
The aim is to promote bilateral economic relations Още
BCCI and the Embassy of Bulgaria in Morocco with joint initiatives to promote bilateral trade
Bulgarian products can be successfully sold on the Moroccan market Още
Meeting with the new Consul General of Bulgaria in Shanghai
Intensification of the exchange of business and economic information was discussed Още
BCCI provides legal consultations
In the field of company, commercial, administrative and labour law, out-of-court dispute resolution Още
BULGARIAN ECONOMY
Key Indicators for Bulgaria (as of 05.04.2021)
Source of the data are the NSI statistical surveys and BNB data Още
Bulgarian power industry gears up for green technologies
Conclusion based on the recent amendments to the Recovery and Resilience Plan Още
Payment of concession fees for Sofia Airport postponed for ten years
Minister of Transport explained the amendment proposed by reduced passenger traffic Още
BULGARIA IN EU
The European Commission proposed a new legislative instrument – EU Startup Nations Standard of Excellence
In Bulgaria, some of the practices have already been adopted Още
UPCOMING EVENTS
Invitation for participation in the virtual training: Entrepreneurship and how to start a business in Bulgaria
Organized under the ERIAS project European Refugee Integration Scheme Още