A series of meetings dedicated to the cooperation with France 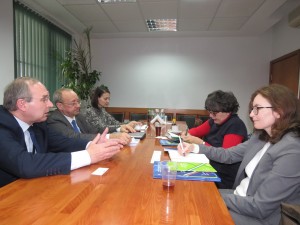 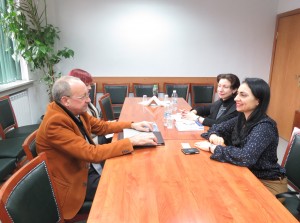 The President of BCCI Tsvetan Simeonov met with Florence Dobelle, Head of the Regional Economic Service at the French Embassy, Laure Joya, Economic Counsellor at the Service and Vladimir Tomov, Chairman of the Investment Council at BCCI.

The representatives of the Regional Economic Service at the French Embassy provided information about their activities in the region, covering 9 Balkan countries, as well as the complex services they provide to French investors in Bulgaria and the neighbouring countries.

Tsvetan Simeonov presented the system of regional chambers of commerce and industry in Bulgaria, which, unlike the French chambers, operates on the principle of voluntary membership. He pointed out that the chamber is a constructive partner of every government and supports any initiative aimed at improving the economic environment, the legislative framework, as well as presenting Bulgarian companies on the local and international markets.

Cooperation with France was also discussed at a meeting with Vessela Todorova-Mosettig, Director of the French – Bulgarian Chamber of Commerce and Industry (FBCCI) and Maya Kirova, Manager “Services for the Enterprises” at the Chamber.

During both meeting, the organization of a “B2B Meetings Day” was discussed in order to connect Bulgarian suppliers and subsuppliers with French industrial companies, focusing on the automotive industry. The event is planned for the beginning of June this year.