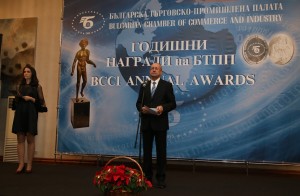 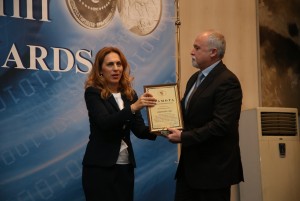 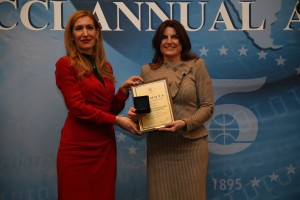 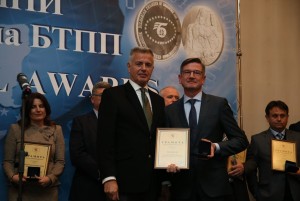 On 4th December, the Bulgarian Chamber of Commerce and Industry conferred its annual awards at an official ceremony held in Sofia Hotel Balkan.

As the oldest and highly respected business organization in the country, BCCI maintains its traditions diligently, and for the 26th consecutive year ranked and presented awards for the achievements of companies and partners that have worked for the development of Bulgarian business.

Special guests at the award ceremony were the Deputy Prime Minister Mariana Nikolova and the Minister of Tourism Nikolina Angelkova.

“Every day we all prove the attractive side of Bulgaria as a place of doing business and investment”, said the President of BCCI Tsvetan Simeonov in his opening speech. In turn, Deputy Prime Minister Mariana Nikolova emphasized: "Today we can say with confidence that the situation in the country is stable and predictable."

The Deputy Prime Minister presented the first award for the evening – a “Hermes” bronze statuette made by the artist Stavri Kalinov and an Honorary Diploma – to company Cambro Ozay BG Ltd., town of Shumen, ranked first in the category “TOP 100 Companies ranked by alteration of sales revenue, maximum value of net profit, maximum value of profitability of assets, equity and sales in 2018”.

Bayer-BG Ltd., town of Ardino, won the first prize in the category “TOP 100 Companies ranked by alteration of sales revenue and maximum value of profitability of sales and equity in 2018” and also received a “Hermes” bronze statuette and an Honorary Diploma from the President of the Chamber Tsvetan Simeonov.

H.E. Mrs. Pooja Kapur, Ambassador Extraordinary and Plenipotentiary of the Republic of India to the Republic of Bulgaria, was awarded in the category “Ambassador” for her contribution to the development of the diplomatic relations between the Republic of Bulgaria and the Republic of India and for her collaboration with the Bulgarian Chamber of Commerce and Industry in achieving its objectives, and Mr. Pham Tuan Huy, Head of the Commercial Office of the Embassy of the Socialist Republic of Vietnam in Sofia received a “Hermes” bronze statuette and an Honorary Diploma in the category “Commercial Counsellor”, for his outstanding contribution to the promotion of the economic cooperation between Bulgaria and Vietnam.

Traditionally, BCCI noted the contribution of the Bulgarian media: television “Bulgaria ON AIR” received the award in the category “Media” for objective presentation of the role of the Chamber, covering of the positions of its members on topical issues and regular broadcasting of news about BCCI’s daily activities, and Natalia Ganchovska from the Bulgarian National Radio was awarded in the “Journalist” category for objective covering of the positions of BCCI and its members on current business topics, with distinct attention to the problems of Bulgarian entrepreneurs and the role of the Chamber in their defence.

The Bulgarian Chamber of Commerce and Industry expresses special thanks to its partners in the event: “Geotechmin” Ltd., “National Business Network” and “Atradius”.

Company “Geotechmin” was established in 1990 and in almost three decades has managed to become one of the leading business groups in the Bulgarian economy. “Geotechmin” Ltd. is the main company in the group, which operates in various business areas: mining, construction and infrastructure, trade, energy and environment, real estate and investment projects, services and agriculture. The success of “Geotechmin” is based on a long-term business strategy, a team of professionals in various fields, the implementation of innovation and social responsibility. As a responsible investor and employer, the manager of “Geotechmin” Prof. DSc. Eng. Tzolo Voutov directs significant funds for modernization and innovation, reinvestment in perspective business areas, as well as in education and motivation of the employees. “Geotechmin” strives to contribute to the economic growth and sustainable development of the regions and the country.

“National Business Network” actively contributes to the development of the activity of its member companies by providing them with preferential services included in a specialized business package offering free legal, tax, financial, accounting and other consultations. Focused on providing opportunities for developing and expanding B2B partnerships, with its ideas “National Business Network” helps its members to be competitive in the fast-paced business environment.

“Atradius” is the world’s second largest trade credit insurer, represented in more than 50 countries with annual revenue of EUR 1.8 billion. The company has over 90 years of experience in trade credit insurance and a database of more than 240 million buyers worldwide. 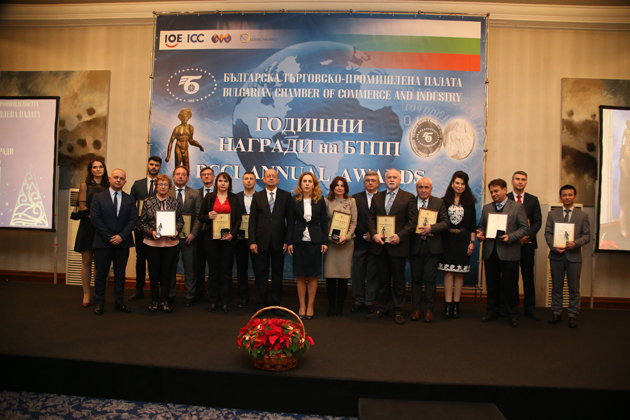