BCCI awarded the Ambassador of the Republic of Argentina in Sofia H.E. Alberto A. M. Trueba with an Honorary Diploma 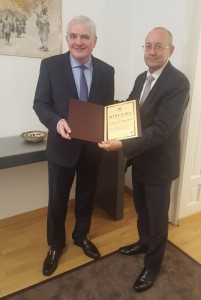 The President of the Bulgarian Chamber of Commerce and Industry (BCCI) Tsvetan Simeonov presented H.E. Alberto A. M. Trueba, Ambassador Extraordinary and Plenipotentiary of the Republic of Argentina in Sofia with an Honorary Diploma on the occasion of the end of his term of office in Bulgaria.

The Chamber awarded Ambassador Trueba for his active collaboration with the Bulgarian Chamber of Commerce and Industry and for his contribution to the development of the economic ties between Bulgaria and Argentina during his term of office.

Since the beginning of the Ambassador’s 4-year-term in Bulgaria in June 2016, BCCI and the Embassy of Argentina have regularly exchanged important economic information, cooperated with businesses from both countries, organized joint events to intensify the bilateral cooperation. Ambassador Trueba also held a series of regional meetings, including with the regional chambers of commerce and industry in Burgas and Stara Zagora.

NEWS FROM BCCI
BCCI awarded the Ambassador of the Republic of Argentina in Sofia H.E. Alberto A. M. Trueba with an Honorary Diploma
On the occasion of the end of his term of office in Bulgaria Още
Discussion of initiatives for promotion of trade and economic relations between Bulgaria and South Africa
Meeting with H.E. Thabo Thage, Ambassador of the Republic of South Africa Още
BCCI provides legal consultations
In the field of company, commercial, administrative and labour law, out-of-court dispute resolution Още
VIEWS ON BULGARIA
Sofia included in technology cities of the future 2020/21 report by fDi Magazine and TNW
The ranking focused on the most promising prospects for start-ups, tech and innovation investment Още
BUSINESS OPPORTUNITIES IN BULGARIA
Business Cooperation E-Bulletin
Още
LABOUR TRENDS
The total hourly labour cost for the first quarter of 2020 rose by 10.2%
Compared to the first quarter of 2019 Още
Employers and self-employed from the Transport and Tourism sectors can receive EUR 148 a month to keep their employees
Още
Unemployment in Bulgaria is between 16.5% and 4.4%
In May there was a downward trend in unemployment compared to April Още
The average social security income in Bulgaria for April 2020 is BGN 1057
Още
TOURISM AND TOURISM INDUSTRY
Over 80% of tourist trips in 2020 were in the country
In the first quarter of 2020 Още
Bulgaria's Sunny Beach Resort ranked the best value destination
In the annual international list of Holiday Costs Barometer Още