First sod of the supercomputer in Sofia 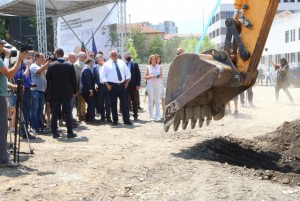 "This supercomputer is not only for healthcare and for drugs, but for everything. It can make billions of operations, comparisons and conclusions in an hour". This is what Prime Minister Boyko Borissov stated during an official ceremony in Sofia Tech Park on the occasion of a symbolic first dig of the building, which will house the Bulgarian supercomputer.

Bulgaria is one of the eight countries in Europe where a European supercomputer will operate worldwide. Prime Minister Borissov gave his support to this process during the Bulgarian Presidency of the Council of the EU in 2018, when an international conference on the digital future of Europe was organized.

Prime Minister Borissov pointed out that putting the supercomputer in Bulgaria will greatly support the development of automotive clusters, as well as of the science and innovation sectors. The Prime Minister added that such projects will be beneficial for generations to come, and that our country has competed with the whole of Europe for their implementation. "Let us thank the European Commission, but let it be known that Bulgaria also participates in the financing and we are proud of what started today," said Prime Minister Boyko Borissov. He expressed hope that after overcoming the effects of the coronavirus, the economy will recover quickly and many new investors will come to our country.

The supercomputer will be one of 5 petascale supercomputers aimed at upgrading Europe's computing power. Bulgaria's candidacy was approved under the EuroHPC Joint Undertaking procedure, in which 8 locations were selected on whose territory supercomputers to be built. With the start of the application of the modern device, our country will establish itself as a digital hub in the region. The supercomputer should be up and running by the end of February 2021.

The state funding of the project, including the estimated operating costs for the first 5 years of operation, amounts to EUR 12 million, and the entire project is worth around EUR 18 million.