Minister of Transport: “Bulgaria shall submit the Mobility Package I before the Court of Justice of the EU” 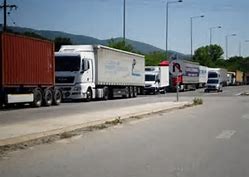 Bulgaria shall submit the Mobility Package I before the Court of Justice of the EU within two months of its publication in the Official Journal of the Union. The Minister of Transport, Information Technology and Communications Mr. Rossen Jeliazkov made this statement during a press conference, which was organized on the occasion of the final adoption of the Mobility Package I by the European Parliament. "We shall demand some of the Mobility Package I provisions to be repealed and the necessary preparations are currently underway. Other Member States shall have the opportunity to join our position, so that we could be more effective during the case procedure”, said explicitly Rossen Jeliazkov.

"In parallel with preparations for the case, the Bulgarian side shall continue to insist on the European Commission to complete by the end of this year the impact assessment on the consequences of returning the vehicle within eight-week period, as well as the application of part of the rules related to the land-side of the combined transport services. We expect the Commission to fulfill its commitment and, following the impact assessment, to propose a new legislative act, wherein these measures and these consequences of the proposal to be repealed”, the Minister said. "I thank all Bulgarian MEPs who expressed a unified position against the Mobility Package I, in defense of the national interest. We will continue to stay side-by-side with our carriers in the forthcoming battle. I believe that the Bulgarian representatives in the European Parliament and all institutions and colleagues, as well as, will continue to support us", said Minister Jeliazkov.

According to him, the Mobility Package I was originally conceived as a legislation that aims to achieve balance between the working and social conditions of drivers and the freedom of carriers to provide cross-border services. "The ultimately adopted Mobility Package I deviates significantly from the set goals and the European values. It became clear that ​​the idea about the proper functioning of the Single Market and the legal certainty have not been among the essential elements taken into account during the vote. The practical shortsightedness and inapplicability of some of the provisions, their disproportionate and discriminatory nature, as well as the current pandemic situation were not taken into account", underlined Rossen Jeliazkov. The Minister pointed out that the deprivation of the right of drivers to choose the place for their rest violates one of the most fundamental rights of the EU - the free movement of people. He added that the return of the vehicle to the country of establishment is in conflict with the proclaimed policies of the European Commission and of the Union, and especially with the EU Green Deal.