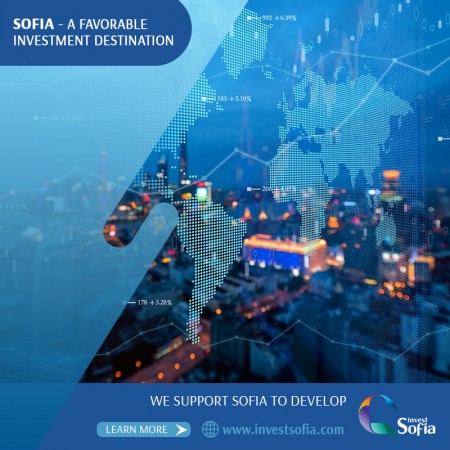 Over the past months, several international companies established business operations or expanded their current operations in Sofia. The city offers indisputable advantages that attract investor interest, and the decisions for additional investments show their long-term development plans in our country.

Sofia is the largest economic center in Bulgaria, producing 40% of the county’s GDP and 1/3 of the country’s exports. Over 50% of the population has higher education and a high level of foreign language proficiency. Compared to other destinations in Europe, Sofia offers low prices for renting high-end offices, low hourly labor costs, has a well-developed transport system both in the city and connecting other economic centers in the country, while Sofia Airport offers 1-3 hour flights to the biggest European capitals and cities. Sofia has also established an image of a regional ICT center with large units of global companies that have chosen the city as a place to develop key operations, often using it as a starting point to reach markets in Europe and Asia.

The following are some of the companies that have chosen Sofia to establish and expand their activities in areas such as logistics, business process management, blockchain, automotive software, industrial production, consulting services, and more.

DocuWare, the world’s leading company in business process management software solutions, has opened a technology consulting and customer service center in Sofia for the markets in Europe, the Middle East, and Africa. The company is planning a gradual expansion in the coming years with experts in areas such as cloud technologies, Java and .NET programmers, B2B customer service, and more.

The American fintech GreenBox POS also started operating in Sofia acquiring the Bulgarian card payment services company Transact Europe EAD for EUR 30 million. GreenBox uses its blockchain technology for secure payments and is about to secure market share in Europe through a deal for the Sofia-based company. Transact Europe is licensed as a financial institution, regulated by the EU, is a member of Visa, Mastercard, and the Chinese UnionPay, and is part of the SEPA euro payments program. All this provides it with a network for payments. Access to the European Economic Area will significantly expand the American company’s business in Europe, GreenBox POS stated in its official release.

The British Knight Frank, the leading consulting company in business and luxury residential properties, has also entered the Bulgarian market. The representative office in Bulgaria will be in Sofia, and the company already has its own office in Interpred. The entry of Knight Frank is in response to the growing market in Sofia and the region and as a start, the team here will focus mainly on services and mediation in renting and letting properties in the office segment. Knight Frank is headquartered in London and has more than 20,000 employees in nearly 500 offices in 57 countries worldwide. The group consults and works with individual owners and buyers, and with big investors and corporate clients. The company’s office in Sofia will join three other large consulting companies in the field in Bulgaria – Colliers International, Cushman & Wakefield Forton, and MBL.

FlichVuѕ, the largest carrier in Europe, has also opened an expert center in Sofia. It is the German company’s third center of the kind in Europe, with the other two centers being located in Kharkiv and Nuremberg. The Sofia team will be engaged in marketing, technology, and accounting. This is a new activity for the company in our country. Since 2018, FlіхВuѕ has been offering bus transportation in Bulgaria to destinations in Central and Western Europe, but now it has chosen Sofia to establish an office to manage the company’s activities.