German company will base e-Cars production in Bulgaria 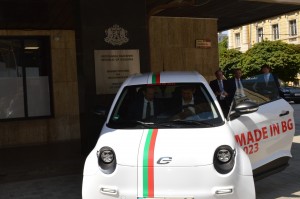 I am extremely proud that a German maker of electric cars of the future will base its main production in Bulgaria. This sentiment was shared by Minister of Economy Kiril Petkov, who, on 10 July, signed with Next.e.GO Mobile SE the paperwork finalising a procedure to launch the company’s investment project in Bulgaria.

Minister Petkov noted that our country was selected in competition with other European countries. He explained that the entire aluminium frame, the cables and the software will be made in Bulgaria.

The German company will invest in building the first-of-its-kind electric car plant in the country. The planned facility in Lovech is the culmination of a successful cooperation between the Ministry of Economy, Automotive Cluster Bulgaria and private investors as well as institutions from Bulgaria and Germany. Minister of Economy Kiril Petkov and representatives of the company demonstrated and tested the vehicles for the media.

The German company, which will operate in Bulgaria through a subsidiary called Next.e.GO Bulgaria AD, is expected to invest over BGN 280m and install capacity enough for the production of more than 30,000 electric cars annually. The new facility will take up part of the Balkan AD site in Lovech, where some of the first ever cars, bicycles, motorcycles and planes in Bulgaria used to be made.

Based in the German city of Aachen, Next.e.GO Mobile SE is a manufacturer of electric vehicles and sustainable mobility systems. Its facility in Bulgaria will make the following models: e.GO Life 70, e.GO Life Sport, e.GO Life Cross.

Among the suppliers of original car parts for Next.e.GO are some of Germany’s most prestigious Tier 1 producers, such as Bosch, Continental, ZF, Hella, etc. The drivetrain is designed by Bosch specifically for e.GO Life and has a projected life expectancy of over 20 years without need for maintenance. In addition, maintenance services for e.GO vehicles will be provided by hundreds of Bosch Car Service workshops located in cities across the country.

The planned cutting-edge car plant is currently being designed, with construction expected to be completed in record time by the end of next year.

NEWS FROM BCCI
Traditional meeting of the EU club at BCCI on the occasion of the Slovenian Presidency of the Council of the EU
The Ambassador of Slovenia in Sofia outlined the main priorities and directions of the Presidency Още
The partnership with the Polish Investment and Trade Agency continues
Discussion of the possibilities for deepening the contacts between Bulgarian and Polish companies Още
The BCCI honoured the Ambassador of the Kingdom of Saudi Arabia in Sofia
The ambassador was awarded an honorary diploma on the occasion of his departure from our country Още
Groningen university's business and economics students report on the "economic uprising of Bulgaria"
Още
The Bulgarian Chamber of Commerce and Industry and the Open Sofia Foundation are launching an active partnership
Още
Training “How to find a job in Bulgaria”
21 July 2021, at BCCI Още
BULGARIAN ECONOMY
German company will base e-Cars production in Bulgaria
The company is expected to invest over BGN 280m and install capacity enough for the production of more than 30,000 electric cars annually Още
The National Employment Agency: Unemployment at record low in June
The level of registered unemployment in the country continued to decline Още
The monthly inflation in June 2021 was -0.2%
The annual average inflation in the last 12 months was 1.0% Още
NSI: Bulgaria’s exports in January – May 2021 up 19% y/y
The total exports of goods increased by 32.3% compared to the same month of the previous year Още
ANALYSIS AND PROGNOSIS
The IME presented the English version of "Regional profiles: Indicators of development" 2020
Effects of the pandemic on the long-term perspective of the various regions Още