Three ministries are joining forces to develop the cultural, creative and recreational industries 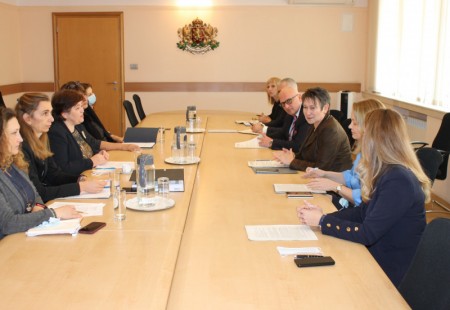 The Minister of Tourism Stela Baltova, the Minister of Economy Daniela Vezieva and the Deputy Minister of Culture Borislava Taneva held a meeting to discuss the possibility of signing an agreement to unite the efforts of the three ministries for the development of cultural, creative and recreational industries.

Its aim is to develop a framework for long-term administrative relations, mutual exchange of information and the creation of an effective mechanism for coordination between the parties. At the meeting, concrete steps and actions were agreed for the implementation of joint activities for prioritization of these industries, which would improve access and funding opportunities in the cultural, creative and recreational sectors.

“We offer an innovative approach to the cultural, creative and recreational industries. The idea is to make a working mechanism with concrete steps and actions in order to prioritize these industries”, said the Minister of Economy, host of the meeting. According to her, they are a priority in the next programming period, as well as in the Innovation Strategy for Smart Specialization 2021-2027, in which the potential for growth is greatest and support should be directed there.

“The innovative strategy for smart specialization must take on new dimensions. Digitalization, artificial intelligence and innovation open up completely new opportunities for development – such as building a virtual reality that recreates our cultural and historical heritage,” said Minister of Tourism Dr. Stela Baltova.

She pointed out that we have a large resource and variety of tourist products, many archaeological, ethnological, historical sites, religious sites and cultural institutions – museums, galleries, community centers, and many events related to intangible heritage, which are held throughout the year.

“In Bulgaria there is a rich cultural, event, festival tourism, which attracts many visitors and at the same time covers a wide range of activities in the field of art, cultural heritage and cultural and creative industries. Within this environment, with their participation, tourists and the local population themselves create culture and become a real part of it, bringing added value to this “creative” tourism,” said Minister Baltova.