Prof. Steve Hanke was awarded the honor “Doctor Honoris Causa” of the Bulgarian Academy of Sciences 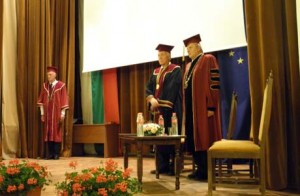 The President of BAS, Acad. Stefan Vodenicharov, handed the honor “Doctor Honoris Causa” to the world-famous economist Prof. Steve Hanke, known in Bulgaria as “the Father of the Currency Board”. Prime Minister Plamen Oresharski was also present at the official event. He congratulated Prof. Hanke and rendered him gratitude for his regular comments regarding our country - “at times critical, other times encouraging, but always with a positive attitude“, and expressed hope that he would continue being cooperative and benevolent to Bulgaria in the future.

BCCI’s Vice-President Georgi Stoev, who was among the official guests, congratulated Acad. Vodenicharov and Prof. Hanke on behalf of the Bulgarian Chamber of Commerce and Industry.