BCCI took part in the EUROCHAMBRES Economic Forum in Italy 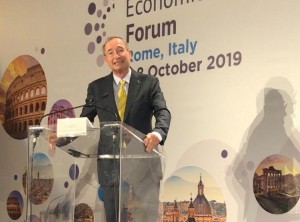 Traditionally, the event brings together more than 300 leaders of European, national and local chambers of commerce and industry to discuss the changing political and economic landscape in Europe.

In his opening speech to the forum, the President of EUROCHAMBRES Christoph Leitl said that “Europe is at a crossroads and the chamber network met exactly at the right time to discuss the best path and how to accompany our businesses along the route”.

Enrico Giovannini, Italy’s former Minister of Labour said that European companies should follow the rules of the circular economy and think about a sustainable future. The new European Commission also promotes the European Green Deal.

A meeting of the European Women Network (EWN) was held within the forum. Bulgaria was represented by Ms. Iliyana Filipova, Vice-President of the Chamber of Commerce and Industry – Vratsa. She took part in a discussion on access to financing. The work-life balance was also discussed. All topics were summarized in a survey conducted by EWN.

Georgi Stoev, Member of the Board of Directors of BCCI, actively participated as a moderator in the session dedicated to internationalization. It sparked a lengthy debate on how to stimulate growth through the internationalization of SMEs and to maximize the benefits of free trade and partnership agreements signed between the EU and other countries and regions around the world.

Based on the discussions held during the EUROCHAMBRES Economic Forum in Rome, the representatives of the European network of chambers of commerce and industry joined their efforts and prepared a series of recommendations to be delivered to the European Commission and the European Parliament for the period 2019 – 2024. They are mainly related to the sustainable growth and competitiveness of the business.

After the forum, a meeting of the Board of EUROCHAMBRES was held. The President of BCCI Tsvetan Simeonov discussed with his chamber of commerce colleagues topical issues faced by the organization. A new EUROCHAMBRES Action Plan and Strategic Programme were discussed. The priorities of the organization were also reviewed, with the aim of focusing on 6 key areas of action so that the mission of the organization to connect the business with Europe to be met, and to generate and implement specific activities in these areas.

An election of the management of the organization for the next two years and the Board of EUROCHAMBRES for 2020 was also held. The current President Christoph Leitl was re-elected for another 2-year term. In his speech he emphasized the need for a more active policy towards the European institutions, a higher level of digitalization, less bureaucracy and more new markets for European companies. The President of BCCI Tsvetan Simeonov was re-elected as a member of the Board of EUROCHAMBRES, and Georgi Stoev – as a member of the Budgetary Committee.