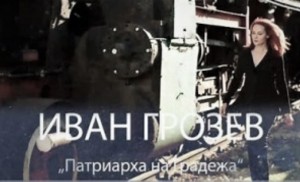 With great satisfaction the Bulgarian Chamber of Commerce and Industry notes the positive reaction of the general public to the film about the life and work of the first Chairman of the Chamber Ivan Grozev - interest exceeding expectations after its presentation on social networks. The film which is translated into English and Spanish was recently broadcast on national television. So far the movie has been seen more than 1800 times, which is an evidence of both its high artistic qualities and the interest in events and personalities of the most dynamic period in Bulgarian history in the late 19th and early 20th century.

BCCI received congratulatory addresses from local and foreign institutions and diplomatic missions for this patriotic initiative.

"I fully agree with your remarks regarding the importance of keeping the historical memory of the people alive and its transcendence for the future of any nation," said in an official letter the Ambassador of Spain to Bulgaria H.E. Alejandro Polanco and congratulated the President of the BCCI on this initiative, dedicated to the remarkable biography of Ivan Grozev and especially to his ties with Vasil Levski, the most prominent hero in Bulgarian history.

Satisfaction with the film and gratitude for the opportunity to promote the works of the founders of the Bulgarian Chamber of Commerce and Industry were expressed by H.E. Mrs. Caridad Yamira Cueto Milian, Ambassador of Cuba, and H.E. Khalid Ibrahim Emara, Ambassador of the Arab Republic of Egypt in Sofia.

Ms. Lyubka Kachakova, Trade and Economic Adviser at the Consulate General of Bulgaria in Los Angeles, expressed admiration for the way this patriotic project was implemented and noted that the English subtitles of the film allow it to be shown to a wider audience.

"It is important to remind our contemporaries of what our ancestors did," said Daniel Kiryakov, Communications and Public Affairs Manager at the American Chamber of Commerce in Bulgaria.

The Bulgarian Ambassador to Argentina Stoyan Mihaylov, along with the assessment of the good translation of the film into Spanish, wrote in an email to BCCI: "I take this opportunity to congratulate you on the idea of ​​making a film about Ivan Grozev, which not only shows the contribution of a unique person to the modern image of our country, but also traces the development of Bulgarian society from the Liberation Movement to the first major steps for the establishment of a free Bulgaria in the modern world. I assure you that the news about the film aroused great interest in the Bulgarian community and we look forward to receiving it with the Spanish subtitles."

Showing of the film "The Patriarch of Creation" is included in the programme of the Week of Bulgarian Culture, announced by the Government of the Autonomous City of Buenos Aires during the third week of May 2021. In addition to the Argentine capital, a screening is being prepared in the cities of Comodoro Rivadavia (Chubut Province), Las Breñas and Presidencia Roque Sáenz Peña (both in Chaco Province), where a significant and well-organized Bulgarian community is concentrated, which enjoys the respect and support of the local authorities. In July, the organization of Bulgarians in Las Breñas will celebrate its 100 anniversary, which is also a good occasion to show the film.

Representatives of the Bulgarian academic community evaluate the film as a significant event with great educational value and suggest that the film be included in the curricula of Bulgarian schools.

The President of the Bulgarian Chamber of Commerce and Industry Tsvetan Simeonov again recommended the film to be watched by as many viewers as possible in order to learn about the life and contribution of a modest but dedicated and patriotic Bulgarian who left a mark in our history.

The whole movie can be seen HERE: https://youtu.be/8MwQtF3O8Lo

NEWS FROM BCCI
“The Patriarch of Creation” movie about the industrialist Ivan Grozev enjoys great interest
BCCI was highly praised for the patriotic initiative Още
Virtual training for third countries nationals on the topic: Entrepreneurship and how to start a business in Bulgaria
21 May 2021 /Friday/ from 10:00 to 13:00 in Zoom Още
Presentation of opportunities for business cooperation with Poland
Current financial and investment products to support joint projects Още
BCCI provides legal consultations
In the field of company, commercial, administrative and labour law, out-of-court dispute resolution Още
INVEST IN BULGARIA
Schwarz IT Bulgaria to add 100 jobs in Sofia
The new jobs will be created as a result of a new expansion project Още
Teva will manufacture Sudocrem in Bulgaria
The pharmaceutical company is moving its production from Dublin to Troyan, Bulgaria Още
BULGARIAN ECONOMY
Bulgaria’s exports grow by 7.3 percent in January – March 2021
The goods imported into Bulgaria increased by 9.2 per cent Още
Bulgarian GDP growth expected to reach 2.7% in 2021
Bulgaria has presented to EU its Convergence Program for the period 2021-2023 Още
Consumer confidence index in Bulgaria up 2.7 pp since January
The expectations for the coming 12 months were that inflation would continue to rise Още
DEMOGRAPHIC POLICY
More Bulgarians return home than emigrate
Among Bulgarians returning to their homeland last year the highest percentage are immigrants from Turkey, about 25% Още
BULGARIA IN EU
EU Cohesion policy: EUR 133.4 million for Bulgaria and Sweden to tackle the social and economic impact of the coronavirus crisis
Още