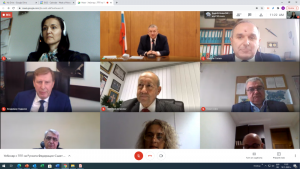 The President of BCCI Tsvetan Simeonov launched the event and stressed that the studies in which the Chamber participates show that the expectations of the business community for the economic climate and the situation during and after the COVID-19 crisis are not positive. However, this encourages companies to look for serious, long-term partners for both trade and investment.

The event was attended by over 60 participants from Bulgaria and Russia, including representatives of 20 regions - chambers of commerce and local business organizations.

Vladimir Tomov, Chairman of the Investment Council at BCCI, made a presentation of the companies and organizations included in the Council, as well as the activities it offers to members and partners.

Two investment projects in Bulgaria have been announced, for the implementation of which investors are being sought. These are a company for the production of mobile electric generators, and a regional logistics and production center.

The Chairman of the Council for Financial, Industrial and Investment Policy of the CCI of the Russian Federation Vladimir Gamza presented the priorities of the Council. The two structures share similar interests, which are the basis for future cooperation.

The investment climate in Bulgaria was presented by a representative of the Invest Bulgaria Agency.

The International Bank for Economic Co-operation, which is among the members of the Investment Council at BCCI, also presented the services and products it offers to medium-sized and large companies.