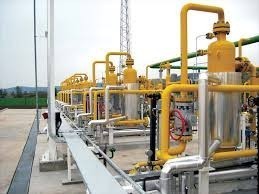 Bulgarian PM Boyko Borissov made a surprise inspection of the construction site of gas interconnection between Bulgaria and Greece. The Minister of Energy Temenuzhka Petkova accompanied him during the inspection.

“Twenty-four kilometers of the pipeline have been completed. The work is going on at the highest speed and I believe that by end year we will be able to cover twice as long distance,” the owner of the Greek company which is building the gas connector line explained.

“Your requirements – a bank warrantee, quicker payments, all this has been done. The agreement is signed too. We keep with the schedule,” PM Borissov said.

So far, the delivered quantity of linear pipes under the project is 159 km. The welded pipes are nearly 72 km, and the total laid and filled along the route under construction are over 11 km. A total of 440 people work for the construction activities of the interconnector.

The start of the construction of the Greece-Bulgaria gas interconnection was given on May 22, 2019 personally by the Prime Ministers of the two countries. The interconnector is one of the seven priority projects for security and competitiveness on the energy market in the European Union. It is also extremely important from the point of view of ensuring diversification of gas sources and supplies for Bulgaria and the region of Southeast Europe. The interconnection will lead to a real diversification of natural gas sources - through it we will receive Azeri natural gas from the Trans-Adriatic Pipeline, in addition through the interconnector Bulgaria will be able to receive supplies through the terminal of Alexandroupolis for liquefied natural gas from USA, Qatar, Algeria , Israel, Egypt and others.