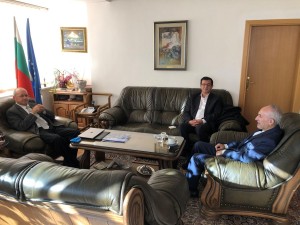 Hashem Nasiri, First Counselor for Economic Affairs at the Embassy of the Islamic Republic of Iran, visited BCCI and spoke with the Chamber’s President Tsvetan Simeonov. Saeid Hadaei, Chairman of the Iranian – Bulgarian Business Association also took part in the meeting.

During the conversation, Nasiri and Simeonov informed each other about the difficulties faced by businesses in both countries. Ways to improve the conditions for co-operation were also discussed. In this regard, it was agreed to activate the exchange of information between the two countries, with the assistance of the Iranian – Bulgarian Business Association, despite the current difficult situation around the world.