Project ERIAS – examples of positive integration in the labour market 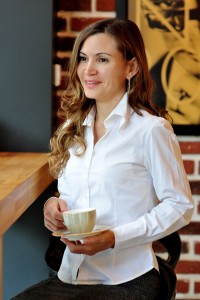 The Bulgarian Chamber of Commerce and Industry gathered a collection of examples of positive integration of people from third countries in the Bulgarian labour market. The aim of the initiative, implemented under the ERIAS project – European Refugees Integration Action Scheme, is to convey a positive message about the integration of foreigners in the host society. These examples are key to achieving subsequent benefits for the labour market.

The examples will be combined in a collection of stories about integration /Vade Mecum/ from different European countries. BCCI will publish some of the examples in its “Infobusiness” bulletin. If you want to share your story - as an employer or employee, see more information here.

Christina was born in Kazan, Tatarstan, Russia. She has been 7 years in Bulgaria. She lived in several other countries before coming to Varna. Kristina is a financier and manages the finances of a chain of Russian stores in Bulgaria. She has studied accountancy. She also has experience as an auditor.

Christina is in Bulgaria because she was looking for a peaceful place to raise her children. At the beginning of her stay in our country she had her own consulting company.

With some luck and because of her presence on the social networks, she meets her current employer. The professional experience she has with international consulting companies and her education and training at the Kazan State Agricultural University, the Kazan State Institute of Finance and Economics, the Institute of Chartered Accountants in England and Wales have helped her get into her current job.

For Christina, the difficulties in her integration in Bulgaria are related to the differences in the mentality of the Bulgarians. She learns Bulgarian while working. Now she communicates freely and prepares documents in Bulgarian. She appreciates herself as fully integrated in Bulgaria, but naturally worries about the future, the expected crisis of all due to the COVID19 pandemic and its consequences.

What helps Christina to adapt is her positive attitude. But what keeps her in Bulgaria right now is her work - the numbers, the finances - this is her environment.

The other magnet that keeps her in Varna and Bulgaria is the beauty of nature, the kindness of people, their spontaneous attempts to speak Russian as soon as they know where is she from.

Christina Parker also shares her advice: "Don't expect open arms, expect difficulties. However, be optimistic - if you do not end up in one city, go to another. "