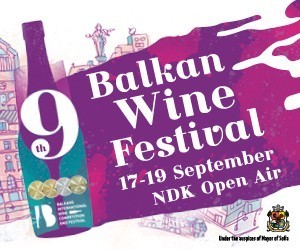 Triumph Selection from the Serbian winery Vinarija Aleksandrović was declared the best wine in the Balkans at the moment. The decision of the expert jury of the ninth Balkan International Wine Competition and Festival (BIWCF) became clear on the first day of the wine festival in Sofia. The traditional award ceremony, called “The Balkan Wine Oscars”, was held outdoors for the first time and was open to all visitors to the wine town in front of the National Palace of Culture.

The Bulgarian Chamber of Commerce and Industry as an organization encouraging Bulgarian manufacturers, for the 9th consecutive year supports the Bulgarian Wine Festival initiative, confident that cooperation and contacts between Balkan companies will be good for the region and its competitiveness at the European and world markets.

The new rotation system of the host countries, announced last year, debuted in the Serbian capital, Belgrade. The 15 judges from 11 countries chose the winners in all categories among the record 230 participants. The chairman of the jury for the ninth time was the first Master of Wine in the Balkans - Konstantinos Lazarakis.

The next country to host the competition will be North Macedonia. This was announced by Galina Niforou, director of BIWCF, from the festival.

The official award ceremony yesterday was opened by the Deputy Minister of Agriculture, Food and Forestry Dr. Lozana Vasileva. She also gave the Grand Trophy to the Serbian winery Vinarija Aleksandrović.

NEWS FROM BCCI
Discussion at the BCCI with the participation of the Bulgarian EU Commissioner Maria Gabriel
EU Innovation Development Policy for the 2021-2027 Programming Period Още
Presentation of opportunities for financing companies from different economic sectors
By using a number of tools - banks, funds, programs and more Още
The Balkans International Wine Competition, BIWC
All wine lovers currently in Sofia are kindly invited to visit the wine festival in front of the National Palace of Culture Още
Discussion of Bulgarian-Lebanese business relations
Among the topics discussed was the idea of resuming the activities of the Association of Bulgarian-Arab Economic Chambers of at the BCCI Още
Project ERIAS – examples of positive integration in the labour market
Nart Haroun from Syria: The job is crucial for the integration Още
INTERNATIONAL COOPERATION
IBA presented investment opportunities to vietnamese industry
Online business forum with bilateral meetings Още
UPCOMING EVENTS
11th Credit Risk Management Conference in Bulgaria
The event will take place online on Wednesday, September 30th Още
BULGARIAN ECONOMY
Unemployment in Bulgaria fell to 7.5 percent in August
The Employment Agency announced Още
Bulgaria's exports to EU decreased by 6.5% in first half of the year
Imports to Bulgaria in the period January-July from the EU decreased by 12.5% ​​ Още
The monthly inflation in August 2020 was 0.0%.
The annual inflation in August 2020 compared to August 2019 was 1.2% . Още
NSSI: Average Insurance Income in July is BGN 1058.71
Още
FINANCE
The Republic of Bulgaria issued dual-tranche EUR 1.25bn 10yr and EUR 1.25bn 30yr Eurobond offering
Още
New Convention with the Kingdom of the Netherlands has been signed for elimination of double taxation with taxes on income and prevention of fiscal evasion and avoidance
Още