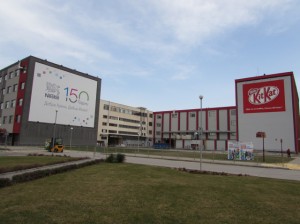 Nestle Bulgaria invested another BGN 23 million in a robotic production line at its factory in Sofia. The innovation was presented during an online event that included a virtual walk showing the factory’s innovations.

The investment is in a new production line of the KitKat brand, with an updated digital network that connects all machines to a single data system. In case a problem occurs, it can be solved remotely. In the current situation of an ongoing pandemic, the company considers this an opportunity of high importance to enable continuous production despite the circumstances.

“The new robotic production line guarantees faster and more efficient production at the Nestlé factory, and a safer working environment for the employees who will be trained to work with automated machines,” the company announced in an official statement.

Thus, Nestle Bulgaria works with two production lines that prepare and package 2.5 million bars of Kat Kat per day (or 1736 pieces per minute), prepared with Bulgarian flour. Of them, 95% are exported to over 35 countries abroad, including South Korea, Mexico, Qatar, South Africa, Singapore, and the Caribbean.

The factory has been operating in Sofia for 80 years, and owned by the Swiss giant Nestlé since 1994. The company employs 1,060 people, 60% of whom are employed in production activities./Invest Sofia

NEWS FROM BCCI
BCCI announces its 27th Annual Awards
A special video film about the award ceremony was recorded Още
Meeting with Theodosios Vallas - Minister Plenipotentiary for Economic and Commercial Affairs at the Embassy of Greece
Още
BCCI signed a Memorandum of Understanding with China Chamber of Commerce for Import and Export of Machinery and Electronic Products
Още
Online Final Conference of the European-funded project Good Wood
The project was aimed at fostering social dialogue for the sustainable development of the wood sector Още
INVESTMENT NEWS
Minister of Economy signed six investment certificates with a total value of over BGN 110 million
As a result of which 600 new jobs will be created Още
Nestle Bulgaria invested BGN 23 million in a robotic production line in Sofia
The investment is in a new production line of the KitKat brand Още
PROGRAMMES & PROJECTS
Bulgarian Government approves AI Development Concept
To support the development of education, public services, agriculture, health and the environment Още
BULGARIAN ECONOMY
The monthly inflation in November was 0.1%
The inflation rate since the beginning of the year (November 2020 compared to December 2019) has been -0.4% Още
LEGISLATION AND REGULATION
The eligible overtime has doubled, the Bulgarian Parliament decided
A collective labour agreement can negotiate a longer duration of overtime, but not more than 300 hours in a calendar year Още
The Bulgarian Parliament finally adopted amendments to the Public Procurement Act
When no funding is provided when opening the procedure, the contracting authority should indicate this fact in the notice or the call for confirmation of an interest Още
BULGARIA IN EU
PetaSC: a new EuroHPC world-class supercomputer in Bulgaria
This new system is expected to be operational in May 2021 Още
SCIENCE NEWS
Three women scientists with a prize of EUR 5 000 for projects to protect the Black Sea, cleaner air and the birth of stars
The talented Bulgarian women were awarded under the program “For Women in Science” by L’Oréal and UNESCO Още