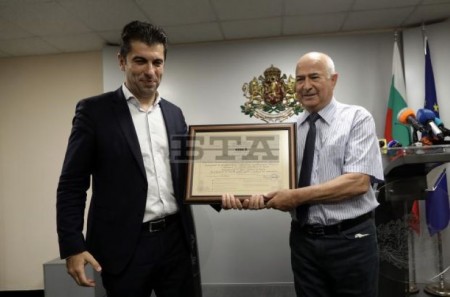 The Minister of Economy Kiril Petkov presented three Class A investment certificates under the Investment Promotion Act (IPA). The investments in these projects amount to a total of BGN 54,182 million and envisage the creation of about 240 new jobs.

Class A investment certificate was awarded to “Trakia Glass Bulgaria” EAD for the project “Workshop for final processing of the produced products”, Targovishte, at a total value of BGN 27,382,000 and creation of 10 new jobs.

Pursuant to the Investment Promotion Act, “Gotmar” EOOD, Saedinenie, received a class A certificate for the investment project “Increasing the production capacity of Gotmar EOOD by acquiring new production facilities and building warehouses and reducing the costs of electricity through the construction of a photovoltaic installation” at a total value of BGN 16,800,000. During the implementation of the investment project and as a result thereof, 200 new jobs will be created.

“Teklas Bulgaria” EAD received a Class A certificate for the investment project "Expansion of production and construction of a robotic warehouse for storage of finished products", Vratsa, at a total value of BGN 10 million and the creation of 30 jobs.

Minister Petkov thanked the investors for implementing and expanding their production on the territory of Bulgaria, emphasizing that all investment projects are export-oriented, which greatly contributes to the economic growth of Bulgaria. All three projects are implemented outside the capital and have a significant contribution to regional economic development.

Since the beginning of 2021, 17 new projects have been certified under the IPA. The total amount of the planned investments amounts to BGN 868.06 million and 1701 new jobs are expected to be created.