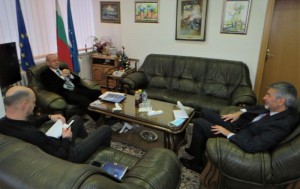 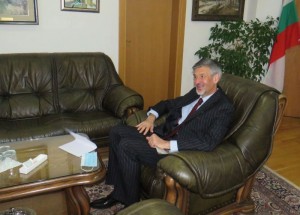 Konstantin Dimitrov, the newly appointed Ambassador of Bulgaria to the Kingdom of the Netherlands, met with the President of BCCI Tsvetan Simeonov.

At the meeting, Ambassador Dimitrov informed about his future plans for the development of economic cooperation between the two countries during his upcoming term of office.

The President of the BCCI reminded of the most important moments of the Chamber's cooperation with this country. Among them is the project for digitalization of the Trade Register of BCCI in the first years after the changes in Bulgaria. Thanks to this assistance BCCI was among the first 11 chambers worldwide that became members of the International CO Accreditation Chain at the International Chamber of Commerce (ICC-Paris), thus receiving international recognition for the issuance of certificates of origin of goods.  The accreditation is an attestation that the Chamber adheres to the strictest international standards and requirements when issuing foreign trade documents.

Attention was also paid to the digitalization of the Arbitration Court at the BCCI, which is a prerequisite for the rapid resolution of commercial disputes.

The Bulgarian Chamber of Commerce and Industry, as an associated World Trade Center Sofia is preparing together with its partner the World Trade Center Leeuwarden, the Netherlands a webinar to present Bulgaria as a good destination for doing business. Special attention will be paid to the capital Sofia and the advantages it offers to foreign companies and investors. The purpose of the event which will take place on 14 January 2021 is to promote trade and investment ties between Bulgaria and the Netherlands.

More information about the event can be obtained from BCCI’s “International Cooperation and International Organizations” Directorate by e-mail: interdpt@bcci.bg