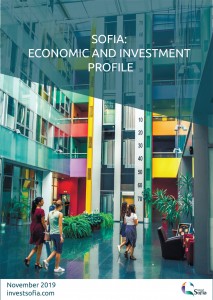 The team of Sofia Investment Agency published its new report titled ‘Sofia: Economic and Investment Profile 2019’. The fourth edition of the annual report contains data and analysis of the leading industries, the target sectors for investments, the importance of infrastructure, local taxes and business conditions, information about Sofia’s performance in comparison to other popular business destinations in the region, as well as a forecast on how the economy of Sofia and the investments will develop in the future. 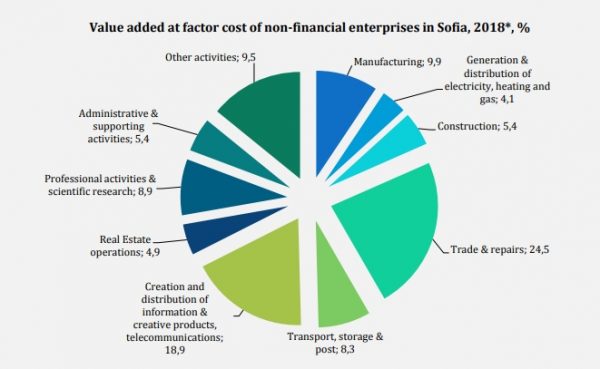 The contribution of Sofia Municipality to the national economy has been growing at a moderate but stable rate in recent years and Sofia remains the biggest regional economy in the country with about 40% of Bulgaria’s GDP.

The change in the value added by the different sectors in Sofia in the last 10 years is in line with the transformation of the Bulgarian economy and its orientation towards higher value-added sectors. While the share of construction sharply shrinks (compared to 2008), Manufacturing, Information Technology and Outsourcing are increasing their share and setting the pace of Sofia’s development.

The manufacturing industry has increased its weight in the local economy after a series of investments in the areas of Pharmaceuticals, Automotive, Cosmetics, Optics, among others. By 2018, the Manufacturing industry had a share of 9.9%, showing an increase of almost 2% compared to its share before the crisis.

The same increase can be observed in the gross added value of the  Administrative and Supporting Activities sector, which includes part of the outsourcing industry (the so-called service call centres).

The other part of the outsourcing industry is included in the Professional Activities and Research sector. These two broad sectors of outsourcing, along with the IT industry (part of the Creation and Distribution of Information and Communication sector), found favourable growth conditions in Sofia in the last few years due to the combination of educated workforce, knowledge of foreign languages and low labour costs.

Sofia’s economy is also characterized by significantly higher investment activity than the national average. Latest data shows that about 40% of the cost of tangible fixed assets and half of foreign direct investments were concentrated in the Sofia region. By the end of 2018, the Capital had attracted EUR 13 billion of foreign investments or about EUR 9 800 per capita, which is nearly three times the average for the country

Most investments in Sofia are directed towards the service sector. The industries in the sector make the biggest contribution to the added value of the local economy and 37% of all FDI by 2018 fall here. This is due to both the high income and consumption in the Capital and the fact that the city is a well-developed transport and logistics centre. Other sectors, attractive for foreign investment, are the Extractive Industry, Manufacturing, Utilities, Real Estate, IT and Outsourcing.

Sofia is also distinguished by a good absorption of EU funds – a major source of public investment. By the end of June 2019, the Capital had absorbed BGN 4.2 billion.

In addition to attracting economically active people from other areas, Sofia is also characterised by a concentration of highly qualified population. While in the country the share of the population with higher education is 28.2%, in Sofia it is significantly higher – over 51%.

Given the concentration of highly-educated working-age population, it is not surprising that Sofia has the highest employment rate – 76% in 2018, which is an absolute record both for the Capital and Bulgaria.

Furthermore, Sofia has the lowest unemployment rate (2.1%) compared to all regions. The highest share of employment remains in the Trade and Repairs sector – nearly 180 000 people or 1/4 of the labour force in the city. Since 2012, there has been a substantial rise in jobs in the IT industry and in Professional Activities – a consequence of the boom in these sectors over the last few years. The number of employees in Administrative and Supporting Activities is also increasing, which can be partially attributed to the growth of the outsourcing industry.

In addition to the educated workforce, Sofia also offers relatively good infrastructural connectivity. Sofia is among the main railway centres in the country and the largest airport in Bulgaria is also located in Sofia. Sofia Airport operates two passenger and two cargo terminals. Sofia Airport services more than 35 airlines, covering over 70 destinations and the number of passengers has increased to almost 7 million annually.

Sofia is also the only city in the country with a metro, which currently serves about 380 000 people daily and continues to expand. Last but not least, Sofia also offers good internet infrastructure, with one of the highest internet speeds in Europe, and 3/4 of the population aged 16-74 has access to and regularly uses the Internet.

Compared to its main competitors in the region, Sofia has a number of competitive advantages. The corporate and personal income tax rate is 10%. Another key advantage of Sofia is the low cost of utilities and transportation. Salaries and labour costs in general are comparable to those in other major cities in the region.

Internet speed and accessibility are also among the advantages of the city. Sofia has one of the highest Internet speeds in Europe. The city has the second highest average internet connection rate in the region, both for downloading and uploading – 24 and 21 megabits per second respectively. Of all the major cities in the region, the average download speed is significantly higher only in Belgrade, but the upload speed in Sofia is the highest.

Overall, the prospects for the development of Sofia are positive. The city will most likely continue to concentrate an increasing share of the economic activity in the country due to its positive demographics and its leadership in the development of the fastest growing sectors. The highly-skilled workforce will keep attracting investments in such rapidly growing sectors as the IT industry, outsourcing of business services and some manufacturing activities with relatively high added value.

Sofia is well-positioned to develop some new forms of economic relations such as digital and shared economy services due to both the appropriate IT infrastructure – highly educated people, high average internet speeds and numerous IT companies and specialists, and the large population.

Most of the companies in the so-called Creative Industries are concentrated in Sofia, and this sector has also been developing rapidly in recent years. Trade, Transport, Storage and Tourism also have good development potential.

The ‘Sofia: Economic and Investment Profile 2019’ report was developed by the Institute for Market Economics for Sofia Investment Agency.

If you have any questions related to the report or other data regarding the investment climate in Sofia, do not hesitate to contact  contact@investsofia.com.

More detailed data, charts, analyses and trends can be found in the full version of the report.

Download full report
NEWS FROM BCCI
BCCI has joined the European network Mirabilia
The new partnership is another step in promoting the sustainable development of tourism Още
A new year – a new successful story from Enterprise Europe Network - BCCI
Още
BCCI provides legal consultations
In the field of company, commercial, administrative and labour law, out-of-court dispute resolution Още
UPCOMING EVENTS
WTCA's General Assembly and B2B session
1-4 March 2020, in Taipei at the Taipei International Convention Center (TICC) Още
Innovative Medicines Initiative information day
17 January 2020, 10:00 - 16:00 Още
ANALYSIS AND PROGNOSIS
The Startup Ecosystem in Bulgaria According to the InnovationShip 2019 Report
An 18% increase of companies that believe they are innovating at a global level Още
New "Sofia: Economic and Investment Profile 2019" Report
Published by the team of Sofia Investment Agency Още
INVESTMENT NEWS
Cordeel is Building a Logistics Centrе for Distributor Orbico with an Investment of EUR 26.5M
Още
FINANCE
The latest issue of the Monthly Report on Bulgarian Economy was released
It assesses the short-term dynamics of main economic indicators Още