Minister Rossen Zhelyazkov: USD 20.6 billion is to be invested in the Western Balkans main transport network by 2030 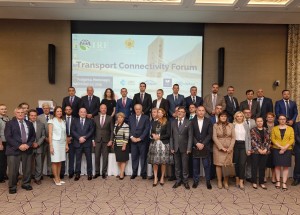 More than USD 20 billion is needed to modernize the main Trans-European Transport Network (TEN-T) across the six countries in the Western Balkans. This was announced by the Minister of Transport, Information Technology and Communications Rossen Zhelyazkov at a regional roundtable in Podgorica, Montenegro. He added that these impressive investments were unbearable for the budgets of the individual countries, and he expressed his belief that the European Union would continue to support the construction of infrastructure in the Balkan region.

Rossen Zhelyazkov pointed out that many initiatives at European and intergovernmental level had been taken in recent years, reflecting the ambition of the European Commission and the countries to develop the transport sector in the Western Balkans. He mentioned the settlement of the Alps-Western Balkans freight corridor, which connected 5 countries - Austria, Slovenia, Croatia, Serbia and Bulgaria. At the same time, the European Commission accepted Bulgaria's proposal to include the country's links with Serbia and Northern Macedonia in the priority corridor of the main Trans-European Network - Orient / Eastern-Mediterranean, said Minister Zhelyazkov. According to him, the adherence of these sections to the corridor would be confirmed in the new Connecting Europe Facility after 2021.

The Bulgarian minister said that developing an efficient transport network in Europe and neighboring regions required not only huge financial resources but also good coordination, uniform standards and procedures. "Therefore, it is important to build the missing sections of the common corridors in the Western Balkans and to modernize the existing routes," he added.

The railway projects that will improve connectivity in the East-West direction, in the part from Sofia to the Western Balkan countries, include the modernization of railway lines from Sofia to the borders with Serbia and Northern Macedonia, said Minister Zhelyazkov. With regard to the development of the road network, the Bulgarian government is working on the construction of highways and high-speed roads, which are a continuation of the Trans-European Transport Network to the Western Balkans and are funded by the European Union and the state budget, he said.