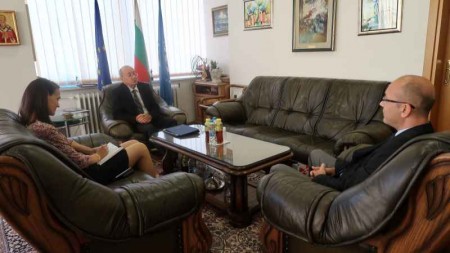 At the end of his 4-year term of office, Mr. Okan Pakbeşe, Commercial Counselor at the Embassy of Türkiye in Sofia, visited the Bulgarian Chamber of Commerce and Industry again and spoke with its President Tsvetan Simeonov.

Mutual satisfaction with the joint work was expressed at the meeting. Tsvetan Simeonov emphasized that from the position of neighbours and strong trade partners, the two countries have many common economic goals. Investments and trade are driving forces in the development of bilateral relations.

Mr. Pakbeşe said that despite the current difficulties, the ambitious Turkish economy expects improvements. He emphasized that business organizations from Türkiye and Bulgaria should continue to encourage the search and finding of business partners from both countries. BCCI’s relations with the Foreign Economic Relations Board of Turkey /DEIK/ need to be restored after the temporary interruption caused by the Covid-19 pandemic.

The Turkish guest informed that very soon a colleague of his will arrive in Bulgaria, who will continue the cooperation with BCCI.

At the end of the meeting, Tsvetan Simeonov presented Okan Pakbeşe with an Honorary Diploma in appreciation of his cooperation and contribution to the development of the Bulgarian – Turkish economic relations.

You can see the awarding of the diploma HERE.