The Ambassador of Japan delivered a lecture at BCCI 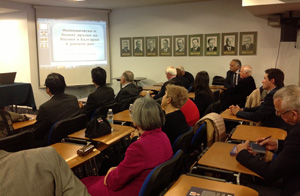 During a lecture at BCCI, H.E. Masato Watanabe, Ambassador Extraordinary and Plenipotentiary of Japan in Bulgaria presented the progress in the bilateral relations Bulgaria-Japan in politics, economy and culture, in the context of the entry into force of the EU-Japan Economic Partnership Agreement.

He said that the main sectors of cooperation between the two countries are IT and automotive industry.

The Ambassador mentioned the series of high-level visits held in 2018 – of the Japanese Prime Minister to Bulgaria in January, as well as of the Deputy Prime Minister of Bulgaria Tomislav Donchev to Japan.

It was emphasized that YAZAKI Corporation was among the employers of the year in Bulgaria in 2018, while Sumitomo Corporation acquired Moto-Pfohe in 2017 and their presence in Bulgaria is expanding.

Good cooperation also exists in the food industry – JAPE is a joint venture company for the production of frozen sushi in Plovdiv.

Last month, SEGA games, working in the IT sector, opened a studio in Sofia.

The Ambassador of Japan appreciated highly the advantages of Bulgaria for attracting foreign investment, including: the good location of the country, its political and economic stability, cost-effectiveness and quality human resources. He informed that a Bulgarian-Japanese business forum is planned to take place in Düsseldorf, which is the second largest center in Europe where Japanese companies are represented, after London.

The event was organized by BCCI and the Tokai University Alumni Association in Bulgaria. The participants asked the lecturers a number of questions and the ensuing discussion was extremely fruitful.