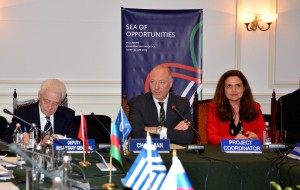 “The development of regional transport infrastructure is a priority for the Organization of the Black Sea Economic Cooperation, but in order to achieve optimal integration in transport networks, we need to pay attention to projects within the Trans-European and Euro-Asian corridors that pass through our countries”, said the Minister of Transport, Information Technology and Communications Rossen Jeliazkov at a Round Table on Transport Connectivity in the Black Sea region. The event was organized in Evksinograd as part of the Bulgarian Chairmanship-in-Office of the organization.

Minister Jeliazkov stressed that significant progress has been made in inter-state cooperation within the organization. In his words, in order to achieve sustainable mobility and high efficiency, countries should focus on major challenges such as the modernization of infrastructure, the deployment of intelligent transport systems, improvement of the competitiveness of transport companies and reduction of the harmful impact on the environment.

The preparations for the Informal Meeting of Transport Ministers of the Member States, to be held in Leipzig on 22 May 2019, were finalized during the meeting in Varna.