Maria Gabriel nominated to be European Commissioner for innovation and youth 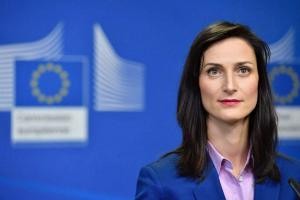 In the new European Commission, Bulgarian Maria Gabriel will create new perspectives for new generations with a portfolio of innovation and youth.

This was announced by EC President Ursula von der Leyen at the presentation of the new European Commission.

Maria Gabriel is working with dedication in the digital field, and will now create perspectives for new generations, said Ursula von der Leyen.

She announced that the current European Commissioner for Neighborhood and Enlargement, Johannes Hahn in the new EC, would be in charge of the administration.

President-elect Ursula von der Leyen said: "This team will shape the European Way: we will take bold action against climate change, build our partnership with the United States, define our relations with a more self-assertive China and be a reliable neighbour, for example to Africa. This team will have to stand up for our values and world-class standards. I want a Commission that is led with determination, that is clearly focused on the issues at hand and that provides answers. I want it to be a well-balanced, agile and modern Commission. This team will now have to gain the Parliament's confidence. My Commission will be a geopolitical Commission committed to sustainable policies. And I want the European Union to be the guardian of multilateralism. Because we know that we are stronger by doing together what we cannot do alone."