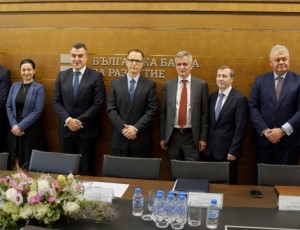 A web-based platform will enable development banks from the region to present their projects in different areas and to seek co-financing for them. This has been suggested by the Bulgarian Development Bank and will allow the institutions to discuss joint activities and to exchange experience and good practices. The initiative was announced by Stoyan Mavrodiev, Chief Executive Officer (CEO) of BDB, at a meeting of development banks from the Balkans and CEE. At the meeting hosted by BDB, five new institutions joined the Memorandum of Understanding signed last year. Thus, at present eleven national and multilateral development banks – including from Croatia, Hungary, Macedonia, Romania, Bosnia and Herzegovina, Serbia, Slovenia and Bulgaria – are part of it. The Memorandum enables to implement major infrastructure projects without accumulating debt from individual governments and by mobilizing resources from different sources. The Agreement also provides for the exchange and promotion of best practices on infrastructure financing, and enhancement and development of trade relations.

The event was part of the International Economic Forum “Roads to Partnerships”, hosted by the Bulgarian Development Bank, which took place on 17 – 18 June in Sofia, also marking the 20th anniversary of the institution. The main focus of the Forum was the InvestEU programme, which is the continuation of the Juncker Plan that will be implemented in the region of Southeastern Europe (SEE). Managers of regional and international banks, the European Investment Bank, the European Bank for Reconstruction and Development, the International Investment Bank, public authorities, the ambassadors of the countries in the region, financiers and business representatives took part in the event.