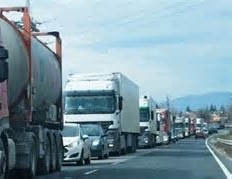 Three more Member States stand against the controversial texts in the Mobility Package I. This was stated by Rossen Jeliazkov, Minister of Transport, Information Technology and Communications, after his meetings on 18 February  in Brussels with Frans Timmermans, Executive Vice-President of the European Commission, Adina Vălean, European Commissioner for Transport, and the ministers from the group of the like-minded Member States.

Rossen Jeliazkov pointed out: “Cyprus, Malta and Estonia have joined the group of the six like-minded Member States (Bulgaria, Latvia, Lithuania, Hungary, Poland and Romania). Today, we, the nine ministers have made it clear and firm that we do not accept what is currently happening, especially with regard to the disproportionate and discriminatory rules that will be imposed by the return of the vehicle at 8 weeks, the return of the driver at 4 weeks, etc.” In his words, the EC’s initial goal of improving the socio-economic conditions for businesses and workers in this industry could not be met by such rules. They are in complete contradiction to the widely publicized European Green Deal and the stated carbon reduction policies. The Minister added that by introducing those – the proper functioning of the Single European Market will be disrupted.

Minister Jeliazkov pointed out: “During the discussions with the two representatives of the European Commission, we received the assurance that the EC will assign, through a public procurement, an impact assessment of the legislative proposals in the Mobility Package I. We insist this being done at the latest by the entry into force of the provisions; we have not received confirmation about that. An 18-month transitional period will commence from the moment of publication in the Official Journal, which is expected to happen in July and after the second reading in the EP. During this transitional period the provisions will not apply.” He reaffirmed that after the publication of these provisions, the Bulgarian side is ready to submit a claim to the Court of Justice of the EU in Luxembourg against the accepted amendments, for which there is support from other Member States from the group of the like-minded. Rossen Jeliazkov categorically stated: “We are ready and we will take every opportunity that institutions offer in order to defend our rights.”