Diplomats from Kosovo meet with the President of BCCI 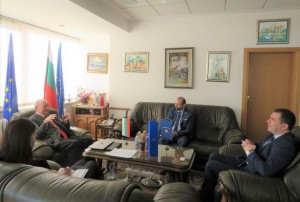 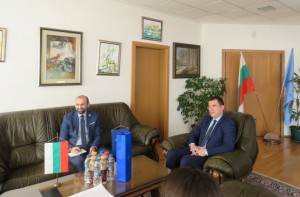 Delfin Pllana, Chargé d’Affaires a.i. of the Embassy of Kosovo in Bulgaria, and Bujar Desku, First Secretary at the Embassy, visited the Bulgarian Chamber of Commerce and Industry and spoke with President Tsvetan Simeonov.

The state of the economies of both countries amid the global COVID-19 crisis was discussed and measures to stimulate the bilateral economic relations were outlined. Tsvetan Simeonov informed the diplomats about the results of the meetings between the representative Bulgarian employers' organizations and the leaders of the parties that will participate in the upcoming elections in the country.

Ambassador Pllana undertook to hold a meeting with Kosovo Chamber of Commerce, a partner of BCCI, in April and to present the planned measures for activating cooperation between companies from Bulgaria and Kosovo. Potential sectors for closer cooperation are automotive industry, agriculture, food industry, tourism, etc.

According to information from the Ministry of Economy, a decrease of 14.1% was observed in trade between the two countries in the period January - September 2020 compared to the same period of 2019; exports decreased by 17.7%, while imports increased by 40.4%. The trade balance remains positive for Bulgaria. The structure of our foreign trade with Kosovo retains its character, with exports being dominated by products and materials from the chemical, processing, food, pharmaceutical and agricultural industries. Imports mainly include glassware, plastics and some agricultural products.