Bulgaria and Albania continue their efforts to expand the economic cooperation 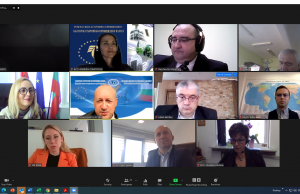 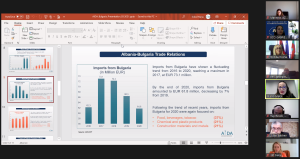 The Bulgarian Chamber of Commerce and Industry hosted an online event to promote economic cooperation between Bulgaria and Albania. The ambassadors of the two countries - of Albania in Sofia H.E. Ms. Donika Hoxha and of Bulgaria in Tirana H.E. Mr. Momchil Raykovski took part in the event. Representatives of the Union of Chambers of Commerce and Industry of Albania, the Invest Bulgaria Agency and business organizations from both countries also took part in the discussion. The common opinion was shared that despite the current challenges and difficulties, the efforts to maintain and develop foreign trade relations should not be reduced.

In 2021, the Bulgarian Chamber of Commerce and Industry holds the rotating chairmanship of the Association of Balkan Chambers /ABC/. In this regard, the President of BCCI Tsvetan Simeonov outlined the priorities of the ABC and presented two of the upcoming initiatives in which chambers of commerce from the region will participate – the Balkan Business Awards /9 April 2021 in Lovech/ and the Balkan Wine Competition /2-4 June in Skopje/ and Festival /17-19 June in Sofia/.

Both countries have suffered from the COVID-19 crisis, said H.E. Donika Hoxha. Consumption in Albania decreased by 3.3% last year. The country’s GDP dropped by 6.7% in 2020, but there are expectations for positive growth in 2021 of about 5%. The business is focused on technologies and in the country there is an increase in the volume of sales of IT products. Other sectors that are developing well despite the crisis are energy and construction. Ambassador Hoxha said the recovery would be a long process, depending not only on the vaccination plan but also on business activity, which is a powerful tool for improving the economic environment. She said promoting economic cooperation was a priority of her mission.

H.E. Momchil Raykovski expressed concern about the future of the bilateral economic relations, and in particular of the existing supply chains, which need to adapt to new forms of doing business. Ambassador Raykovski emphasized the advantages of Bulgaria as an excellent place for doing business and investing. These advantages were supplemented in the presentation of the Invest Bulgaria Agency.

The Secretary General of the Union of Chambers of Commerce and Industry of Albania Evis Dino described the cooperation between the chambers and the respective diplomatic missions as excellent. The Union works with 12 regional offices in Albania and can assist in finding suitable partners from the country, as well as cooperating with industrial parks and free zones in Albania.