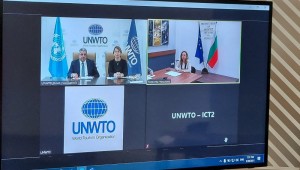 The Deputy Prime Minister of Bulgaria and Minister of Tourism Mariyana Nikolova had a conversation with Zurab Pololikashvili, Secretary General of UNWTO.

‘We highly value your active approach in achieving sustainability, promoting innovations, attracting investments and attaining digital transformation in the tourism industry’, said Minister Nikolova. Further she confirmed her support in regard to all efforts of UNWTO to cope with the consequences of the pandemic in the tourism sector through new and innovative projects, initiatives and constant support, provided by the member countries.

The Secretary General of UNWTO, Mr. Zurab Pololikashvili tweetted after the meeting: ‘Speaking with Minister of Tourism of Bulgaria Mariyana Nikolova, we strengthen our bilateral ties as we work together to restart tourism. Very pleased with the Bulgarian commitment to resume safe travel. You have UNWTO’s full support as we rebuild a greener and more innovative tourism.’

During the meeting Zurab Pololikashvili stated that Bulgaria is a country dear to him as he has visited it on many occasions. He expressed his satisfaction that the Bulgarian Minister of Tourism is also a Deputy Prime Minister, which only proves the significance of the industry. Further he stated that the world tourism organization is involved with many projects related to innovations and digitalization.

‘For us, as well as for Bulgaria, it is of vital importance to restart tourism’, said the Secretary General and added that the EU should find a way to keep its borders open for EU citizens, as well as for visitors from all over the world.

During the conversation, the Secretary General assured the Bulgarian minister of the willingness of UNWTO to provide financial support for dealing with the heavy consequences from the pandemic, for the economic recovery, and for adequate promotion of the industry, which needs to widen its professional capacity.

The Deputy Prime Minister stroke the cord that at the beginning of March, Bulgaria has raised its application for the renewal of the country’s membership in the Executive Board of UNWTO for the period of 2021-2025.

‘This is evidence of our determination to strengthen our mutual dialog and widen our relations in search for new and adequate opportunities under the new conditions in the world’, said Minister Nikolova. She added that the Bulgarian key priority would be the solid establishment of policies that will transform the tourism industry in the post-Covid era, based on innovations, proper investments and competitiveness.

‘We will continue to support the successful projects of the world tourism organization in the education field, like the UNWTO Academy, and also in harmonizing regulations in regard to fast and active measures, when rescuing tourists and in creating an International Code for Tourist Protection’, said Minister Maryiana Nikolova.

Mr. Pololikashvili was pleased that Minister Nikolova expressed her active support in regard to creating the so-called Green Travel Certificate, so we could all see free travelling people across all borders.