Aluminum profiles smart plant to be built near Plovdiv 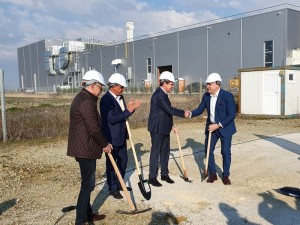 The construction of BGN 40 million production plant for aluminum profiles, the largest on the Balkans, has started in Trakia Economic Zone. Minister of Economy Lachezar Borisov presented a Class A investment certificate to Zdravko Linkin, Chairman of the Board of Directors of Interlink Group AD. This happened on 31 March at the turning of the first sod of a high-tech plant for aluminum profiles in Maritsa Industrial Zone, which is part of Trakia Economic Zone.

The investment project is implemented by Interlink Group, and the production will be carried out by its subsidiary Profilink Ltd.

According to the plan, three more production and storage halls are to be built next to the first plant in the next five to ten years. In terms of its parameters, Profilink's enterprise is set to become the largest on the Balkans in this sector.

“The plant will be smart, with a high degree of automation. New jobs for 150 people will be opened. Our goal is to compete with globally recognised manufacturers of this type of window systems. And also to get ahead of them. Currently, Profilink is in the top 10 of European manufacturers of PVC profiles,” Zdravko Linkin told reporters.

“In the last four years, certified investors have created over 1,000 new jobs and have invested half a billion BGN on the territory of Plovdiv region,” pointed out Minister Lachezar Borisov.