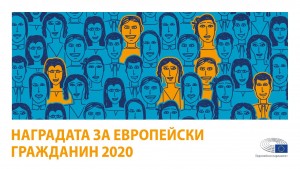 The projects "Medea" of the association "Legal Art Center" and "I see through music" of the Foundation "Music for Bulgaria" are among the 30 laureates from 25 countries that won the European Citizen Award for 2020.

The award is given by the European Parliament to citizens or organizations for their projects, which help to promote better mutual understanding and integration between the citizens of the Member States or to promote cooperation in the field of culture, which contributes to strengthening the European spirit and gives concrete expression to the values ​​enshrined in the Charter of Fundamental Rights of the European Union. It is in the form of an honorary medal and has a symbolic expression. The award ceremony in 2019 did not take place due to the European Parliament elections, and the procedure for selecting winners for 2020 was postponed due to the pandemic.

Representatives of the two awarded projects from Bulgaria will receive an honorary medal at an award ceremony, which will be held first at national level, and then all European winners will be invited to a central award ceremony in Brussels or Strasbourg, scheduled for November 2021 г.

The Medea project of the Legal Art Center Association, represented by actress Snezhina Petrova, was nominated by the national jury because it involves working with children from different ethnic groups and addresses the topic of tolerance and other European values ​​not only by talking about them, but also by developing them through a large-scale theatrical product, which makes it possible to unite the local community in a collective experience. It continues after its presentation in Plovdiv as part of the program of the European Capital of Culture in 2019 and deserves to be awarded for its scope, selected target groups and the desire to promote wider access to culture.

The project is inspired by the eponymous ancient Greek drama of Euripides. Combining proven names from the Bulgarian theater, children of different ethnicities and students of humanities and creative specialties, the project seeks to seek a modern interpretation of topics such as the right to life, expulsion, migration and the power of choice. Through activities aimed at studying aspects of diversity and stage interpretation, participants were involved in a series of art trainings and workshops led by professional actors and psychologists, contributing to social integration. Within the project, in addition to artistic training and workshops, a competition for children's drawings and an exhibition were held, as well as a concert with the participation of children with musical talents from different ethnic groups.

The other winner of the award from Bulgaria is the project "I see through music" of the Music for Bulgaria Foundation, represented by Melina Krumova. Its mission is to develop music education and culture and provide innovative opportunities for disadvantaged people who want to pursue music.

The arguments of the Bulgarian jury for the nomination of this project are that it is aimed at groups of visually impaired children and young people, helps them gain access to art through an adapted methodology for teaching music and gives them room for artistic expression. The project focuses on important social aspects of the integration of disadvantaged groups into society - an issue that deserves more attention.

The foundation's project offers a music education program adapted for children and young people with visual impairments and is the winner of the 2018/2019 competition for social entrepreneurs. It provides full scholarship programs for 6 months of music education to 19 blind children and young people. Thanks to the project, music educators have undergone a training course for more effective work with the blind, music cabinet equipment, specialized software and musical instruments have been purchased and an online competition for the selection of scholarship holders has been organized. The selected young people received free music lessons and individual rehearsals, and two of the fellows gave a concert in front of more than 300 people. In this way, the young participants in the project were given the opportunity to improve and be encouraged to do what they like.

.
NEWS FROM BCCI
AOBE plans to meet with the leaders of all parties and coalitions for which the sociological agencies give a chance to participate in the next parliament
Още
The bilateral trade between Bulgaria and Hungary has potential for development
Bulgarian foodstuff are selling well on the Hungarian market but a diversification of the range of products is required Още
The newly appointed Bulgarian Ambassador to Tokyo visited BCCI
Activation of the partnership between business organizations from Bulgaria and Japan Още
INVEST IN BULGARIA
Bulgarian Ministry of Economy greenlighted seven investment projects worth BGN 176 million
Three of the projects are for high-tech products and services Още
INTERNATIONAL COOPERATION
Bulgaria and US further strengthen cooperation in science, education, technology
An Agreement signed for a new 10-year period Още
SECTORS OF BULGARIAN ECONOMY
Modern industrial stock in Sofia reaches almost 1.4 mln sqm
Logistics, Retail and Distribution Companies Remain the Major Driver on the Market Още
BULGARIAN ECONOMY
Bulgarian economy grew by 2.1% in the fourth quarter of 2020 compared to the previous quarter
According to the seasonally adjusted data Още
The monthly inflation in January 2021 was 0.2%
The annual inflation in January 2021 compared to January 2020 was -0.6% Още
Expensive carbon emissions will not affect the price of electricity in Bulgaria
According to a published report of the Bulgarian Energy and Water Regulatory Commission Още
BULGARIA IN EU
Minister Jeliazkov calls on EC to protect transport traffic and normal functioning of the "green corridors" in Europe
Transport companies face problems in their attempts to continue their activity normally because of the difficulties in passing significant trade routes in Europe Още
Two Bulgarian projects have been awarded the European Citizen's Award for 2020
The projects "Medea" of the association "Legal Art Center" and "I see through music" of the Foundation "Music for Bulgaria" Още
FINANCE
Ministry of Finance launches new issue of 10.5-year GS at weighted average yield of 0.14%
The participants were highly interested, with the biggest amount of GS acquired by banks – 66.7% Още
BNB: Bank deposits of Bulgarian households worth BGN 61 billion in 2020
Up by 9.7% year-on-year Още